Unliveable! Heatwave hits record 46.6C in Western Canada as US north-west also frazzles with temperatures hotter than Dubai: David Phillips told CTV: "I like to break a record, but this is like shattering and pulverising them. 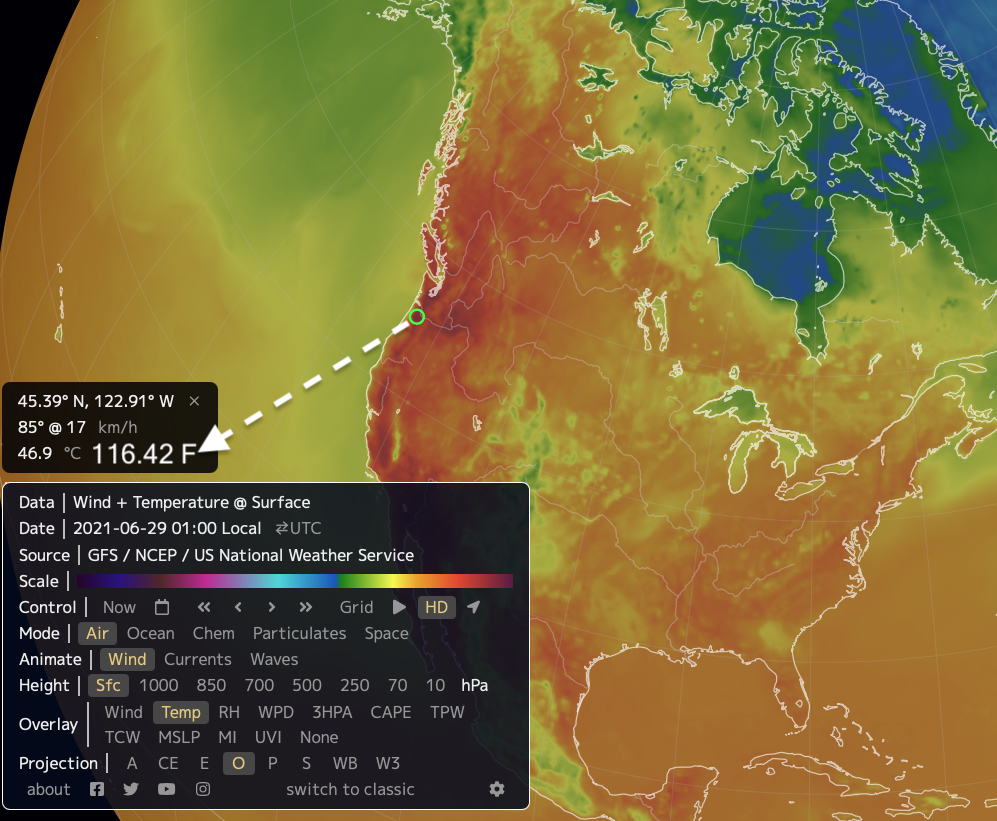 Earthwindmap showing temps reaching 46.9 deg C 116.42 deg F along the US Canadian border later today.
Temperatures we see in Death Valley, the Arizona desert, North Africa or Arabia hit the Canadian US border.
Temperatures previously unknown to Canada and parts of the US-North West are making life extremely unpleasant for millions of people as intense, prolonged, record-breaking, unprecedented, abnormal and dangerous because of a huge high-pressure zone from California up to Canada's Arctic territories and stretching inland through Idaho. Daytime temperatures were in the triple digits Fahrenheit, breaking records in places where many do not have air conditioning. Temperatures along the border are expected to hit a record=breaking 46.9 deg C, (116 deg F) later today, see map above.
According to the BBC, Canada has recorded its highest ever temperature as the country's west and the US Pacific north-west frazzle in the unprecedented heatwave.

Lytton in British Columbia soared to 46.6C (116F) on Sunday, breaking an 84-year-old record, officials said. A "heat dome" of high pressure parked over the region has set new records in many other areas. The US and Canada have both warned citizens of "dangerous" heat levels that could persist this week.

There has been a run on air-conditioners and fans, and cooling shelters have sprung up. Some bars and restaurants - and even at least one swimming pool - were deemed too hot to function. Lytton, which is about 150 miles (250km) northeast of Vancouver, surged past the previous Canadian record.

That was set in two towns in Saskatchewan - Yellow Grass and Midale - back in July 1937 at a balmy 45C (113F). Lytton was not alone. More than 40 other spots in British Columbia set new records.

Environment Canada senior climatologist David Phillips told CTV: "I like to break a record, but this is like shattering and pulverising them. It's warmer in parts of western Canada than in Dubai."

He said there was a chance of topping 47C somewhere.

British Columbia's power providers said there had been a surge in demand for electricity to keep air-conditioners running.

Environment Canada said Alberta, and parts of Saskatchewan, Yukon and the Northwest Territories, should also be on alert.

In its warning, it forecast a "prolonged, dangerous, and historic heatwave will persist through this week", with temperatures 10C-15C above normal, at near 40C in many places.

Gee that's about 20 degrees F higher then south FL is right now! Still think it's all natural?
That high pressure dome is haarp, part of geoengineering operations in play (microwave atmospheric heating). It's the same high pressure dome California has had for years.....yes I said years. Theirs is called a stubborn ridge of high pressure which is their CAUSE of extreme continuous drought.
So there is no GW/CC as TX froze with minus zero temps this winter while the same day across the pond FL was 85F degrees. The arctic circle is 118F and the ground is on fire continuously for at least 2 years on going not extinquished. A cat 5 hurricane stops dead in its tracks and stays parked with no forward movement at all for 36 hours last summer 300 miles off the east coast of FL with no explainable reason for it and never before seen.
Just 3 examples of several from the GW hoax that's not happening in just the past year.

Yes, mother nature is playing with us again.

Maximum temperatures at our house near Lacey (Olympia) WA 60 miles south of Seattle was 105.6 on Monday June 28 5 PM PDT.
Please note that the heat map with the circle is pointing to the Oregon/Washington border along the Columbia River and NOT the US/Canadian border, which is about 275 miles north of the location pointer.
This morning a cool 64F and a marine cloud layer to cool us.

Hi Everyone, These abnormally high temperatures are not natural and definitely not Mother Natures doing by her self. This is Geoengineered weather warfare as all of the extreme weather events are. I could go into great detail to scientifically back up and prove my statement, but am short on time.

Thank you Hawkeye for a few examples. I just want to quickly explain one use of HAARP, there are many uses for this and other Ionic heating facilities around the globe. One use is to heat up the Ionosphere which causes it to expand out up to 80 miles before it pokes a hole in the Ionosphere. When the Ionosphere is heated it expands out into a buldge/dome that pulls the Troposphere and Stratosphere upwards into this artificial dome there by allowing the jet streams in the Stratosphere to be steared. This allows evil entities to stear the atmospheric rivers above us anywhere they want the water to deluge as rain or chemically ice nucleated snow or ice.

This upside down side ways sh-t show is well underway. We live under a chem cloud filled Ionized atmosphere that is routinely sprayed with nanoparticles of aluminum, barium, strontium, titanium, polymers and who knows what else ie. biologicals. This and the Ionic heaters lay the foundation for a Militarized Ionic atmosphere.

Take Care out there.

I actually thought the very strange cold May we had on both sides of the pond was down to our mad scientists fiddling around with the atmosphere and then "BOOM" this happens at the beginning of June. Remember the long-lasting heatwave Arizona and southwest California endured along with the massive wildfires earlier in the month and now this? They have messed up the jet stream, it is so erratic, we had 104+ temperatures the last two summers here in Holland but so far this year summer has been mostly cold and grey.