Covid Protocol Indeed! June 18th; Last week thousands of elite people, (toffs) met every day at Ascot for 5 days without a mask insight and no social distancing at all while the rest of the UK suffered a lockdown extension.
On June the 18th, UEFA threatened to strip the UK of the Euro 2020 final unless 2,500 foreign VIPs are spared Covid protocol to attend the game at Wembley despite lockdown extension in the UK? Ministers are discussing a proposal to "exempt" the 2,500 officials from isolating and following other protocols so Wembley can hold the final showpiece. Uefa's elite are threatening to move the Euro 2020 final out of the UK unless its VIPs are allowed to skip Covid quarantine.
On the same day in an interview on the BBC, another politician claimed people who have refused the vaccine will not be forced to take it, at least, "NOT YET!" In the UK, at the moment you cannot stand in a coffee shop or a pub. You can not meet more than 30 members of your family or have more than 30 guests at your wedding, but 12,000 people can meet at Ascot for 5 days and the UEFA bigwigs can bribe the British government into dropping Covid protocols for UEFA's elite.

While the elitists flaunt their freedom in the faces of the masses, the powers that be are clearly tightening their grip on the British proletariat!  A "proof of vaccination" will be needed in the coming weeks for international travel, according to Health Secretary Matt Hancock and a more damaging report suggests the UK government may require "the document" of people attending sporting events or other large gatherings.

Why not introduce a national ID vaccine passport?

According to a report by RT, the British government may have even more ambitious plans for a "digital certificate" in the form of vaccine passports that could be used as an opportunity to roll out a national ID as part of “the infrastructure of the new normal.” How long will it be before these new "national ID vaccine passports" will be needed to be allowed to work or buy shopping from the supermarket?

It is becoming more and more apparent as the Covid restrictions continue that the elitist has a different agenda than the rest of us.
According to prominent cardiac physician, scholar, and professor of medicine Dr Peter McCullough, MD the recent Corona Virus Pandemic and subsequent vaccination drive is nothing more than an elitist plan to spread fear into the world's population which our governments have seized upon with lockdowns, forced mask-wearing and the denial of free choice.
The elitist plan is so very hard to ignore with proof of a planned operation appearing to go back as far as 2003 with names such as DR. Anthony Fauci, Director of the National Institute of Allergy and Infectious Disease (NIAID) and Chief Medical Advisor to the President. The CDC stands for the Centers for Disease Control and Prevention, The Rockefeller Foundation and the Israeli and American Military to name just a few.
Dr Peter McCullough claims the initial spread of fear across the world was when Covid-19 was initially introduced back in January 2020. This he calls "Bio-Terrorism attack Phase 1;" Fear and isolation among a frightened population which is subdued by a promise of a vaccination appeasing a very scared and very isolated public.
"Bio-Terrorism attack Phase 2;" Both the Covid-19 and vaccination is delivered to the unsuspected public. The vaccination is laced with a "spike protein." According to Tina Hesman, spike proteins work a bit like shape-shifting lock picks. They can change shape to interact with a protein on the surface of human cells. Those spike proteins latch the virus onto a cell. This allows them to get entry into those cells. According to Dr Peter McCullough, the gain of function target of this Bio-Terrorism search has the goal of changing peoples DNA.
Bio-Terrorism attack Phase 3? How will this scenario unfold? Will people who have refused the vaccine be forced to take it, just as the BBC interviewee implied? Will the powers that be find a way to vaccinate our food to ensure we all receive the spike proteins? And how long before we are chipped and are forced to have a full DNA change, while the toffs and the elitist continue to socialise without a Covid protocol?

We are about to be introduced to a new industrial revolution, industrial revolution number 4 in fact. Mankind is about to be fused together with machines, artificial intelligence, or AI. And it is the mega-rich techies, the 1% who are touting this fusion. Elon Musk and his “neuro link” for instance, Bill Gates and his obsession with vaccinations, (we can change someone's DNA now with just an injection) and Bill has already invented a vaccine which kills religious thoughts in religious fundamentalists, there is a YouTube video of him on the web briefing the CIA on the 14th of April 2005.  Bill Bezos and his robot operated Amazon Empire and the most anticipated advance in global recognition so far 5G. You and I are not prepared for what is coming off, just how advanced this new industrial revolution will be, the tech giants have become more powerful than the governments themselves and they will sweep us aside as they introduce their “the new world order”. However, they needed a reset to set the wheels into motion, The Covid Virus.

Robots inevitably will replace humans in the workplace and unemployment is unavoidable eventually for just about everyone. Covid-19 is a big help here for the establishment with millions of hard-working unsuspecting people who are being led like lemmings to jump off the unemployment cliff, losing their jobs because of closure from a novel virus. Asia Today have predicted driverless vehicles are becoming so reliable that in just a couple of years, humans will be banned from driving all over the world because we will be far too dangerous compared to our AI counterparts. So truck drivers, packet deliveries, taxi drivers, bus drivers, factory workers, office workers and others, yes, millions of others will lose their jobs in a blink of an eye. According to Historian and Author, Yuval Harari, speaking at the 2020 Economic Forum in Switzerland all jobs will rapidly disappear introducing "a global useless class," which will be separated from an ever-growing gap of the ever more powerful elitist class. However, this new “useless-class”, post-Orwellian, Proletariat, will be rewarded with a state-owned universal basic income which will be just enough to get by BUT, will only be eligible for people who have been vaccinated against Covid-19 and have received an RFID chip allowing that person to provide and receive every kind of data to and from the powers that be. 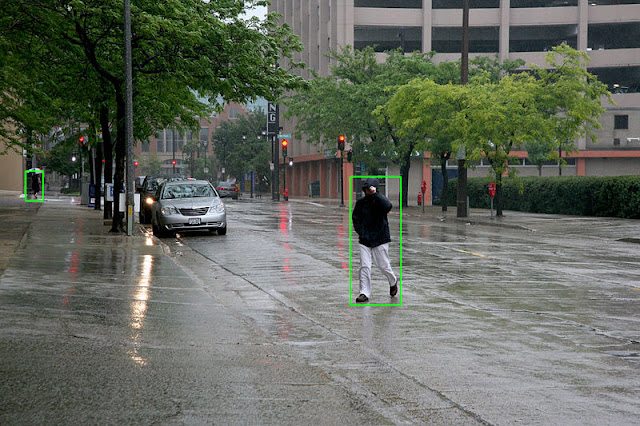 A self-driving car system may use a neural network to determine which parts of the picture seem to match previous training images of pedestrians, and then model those areas as slow-moving but somewhat unpredictable rectangular prisms that must be avoided. Wikipedia
Robots don’t need contracts and are super-efficient and they don’t get sick. I watched a wonderful video from the Happen Network team. I watched their video but alas it has been pulled. They claimed in the video that in June 2019, months before Covid struck the UK government released details about their partnership with the World Economic Forum and released a paper entitled “The Great Reset.” The purpose of the film is to imply that everything from our economics to our culture needs to be changed. Part of the video uses a virus pandemic sweeping the world to impose their idea on the viewer which of course was months before the real virus hit the world.

“Build Back Better” is the new slogan used by western leaders and the Economic Forum, even Prince Charles has made a video called, “RE: SET.” The Economic Forum goes on to predict how our world will be in 10 years time: By 2030 we will all own nothing and we’ll be very happy. Whatever we want we’ll rent and will be delivered by drones and our Western values will have been tested to the breaking point.

Now then, if you think all of the above is from a tin-foil-hat conspiracy theorist let me just tell you something. Covid-19 is a novel virus. A Novel virus refers to a virus not seen before. It can be a virus that is isolated from its natural reservoir or isolated as the result of spread to an animal or human host where the virus had not been identified before. It can be an emergent virus, one that represents a new virus, but it can also be an extant virus, one that has not been previously identified. The Coronavirus is not "new."

On April 25th 2003, the US CDC filed the patent, number US7776521B1 on the “coronavirus transmitted to humans.” Under 35 U.S.C. law, a natural, or nature virus is prohibited from being patented. Either the Sars, Coronavirus is manufactured, or it is natural, therefore making a patent on it illegal, if it was manufactured it is a violation of the biological and chemical weapons treaty and if it is nature, well, filing a patent on something of nature is illegal, so either outcome is illegal.

In the Spring of 2007, the CDC filed a petition with the US patent office to keep their application "confidential and private." They actually not only filed patents on the virus but also filed patents on its detection and a kit to measure it. Because of that CDC patent,, the CDC had gained the ability to control who was authorised and who was not to make independent inquiries into the Coronavirus. They had the motive and most of all they had the monetary gain from turning the Coronavirus from a pathogen to a profit.

Good job Gary. Did you know geoengineering also has many patents proving its existance? It is the elephant in the room no one seems to see or consider its involvement in all you have written.
With the associated geoengineering patents are listed chemicals, heavy metals and radioactive elements being sprayed.....sprayed in our skies daily and globally.
So, dont worry too much about 2030 ushering in that reset because not even the elites responsible for all of these things will be able to withstand what they have done. "For if these days were not cut short no flesh will survive". That is a fact! For me, they can take their vaccine passports and shove them right up their asses! Lol...just say NO! Stop using their stuff. Look up and speak up!

i call it fake clouds.