“The first bang is not necessarily the biggest bang this volcano will give!” Monster: The explosion shot an ash column more than 33,000 feet (seven kilometres) into the sky, with lightning crackling through the towering cloud of smoke

Cots, tents, and respirator masks poured into the eastern Caribbean island of St. Vincent as officials expected to start distributing them on Saturday, a day after a powerful explosion at La Soufriere volcano uprooted the lives of thousands of people who evacuated their homes under government orders. Nations ranging from Antigua to Guyana offered help by either shipping emergency supplies to their neighbour or agreeing to temporarily open their borders to the roughly 16,000 evacuees fleeing ash-covered communities with as many personal belongings as they could stuff into suitcases and backpacks. 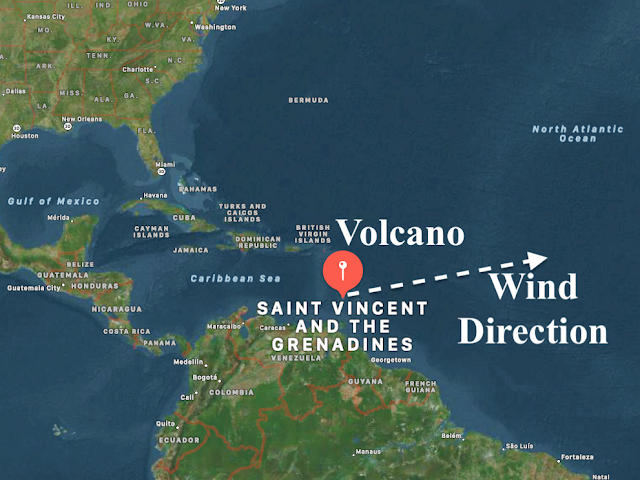 Credit Mac Maps
The volcano, which last erupted in 1979, kept rumbling as experts warned that explosive eruptions could continue for days or possibly weeks. A previous eruption in 1902 killed some 1,600 people.“The first bang is not necessarily the biggest bang this volcano will give,” Richard Robertson, a geologist with the University of the West Indies Seismic Research Center, said during a press conference. Prime Minister Ralph Gonsalves asked people to remain calm, have patience and keep protecting themselves from the coronavirus as he celebrated that no deaths or injuries were reported after the eruption in the northern tip of St. Vincent, part of an island chain that includes the Grenadines and is home to more than 100,000 people.“Agriculture will be badly affected, and we may have some loss of animals, and we will have to do repairs to houses, but if we have life, and we have strength, we will build it back better, stronger, together,” he said in an interview with NBC Radio, a local station.

Gonsalves has said that depending on the damage caused by the explosion, it could take up to four months for life to return to normal. As of Friday, 2,000 people were staying in 62 government shelters while four empty cruise ships floated nearby, waiting to take other evacuees to nearby islands. Those staying in shelters were tested for COVID-19, and anyone testing positive would be taken to an isolation centre. The first explosion occurred Friday morning, a day after the government ordered mandatory evacuations based on warnings from scientists who noted a type of seismic activity before dawn on Thursday that meant magma was on the move close to the surface.

The explosion shot an ash column more than 33,000 feet (seven kilometres) into the sky, with lightning crackling through the towering cloud of smoke late Friday. The volcanic activity forced the cancellation of several flights while falling ash limited evacuations in some areas due to poor visibility. Officials warned that Barbados, St. Lucia and Grenada could see light ashfall as the 4,003-foot (1,220-meter) volcano continued to rumble. The majority of ash was expected to head northeast into the Atlantic Ocean.

La Soufriere previously had an effusive eruption in December, prompting experts from around the region to fly in and analyze the formation of a new volcanic dome and changes to its crater lake, among other things. The eastern Caribbean has 19 live volcanoes, including two underwater near the island of Grenada. One of those, Kick ’Em Jenny, has been active in recent years. But the most active volcano of all is Soufriere Hills in Montserrat. It has erupted continuously since 1995, razing the capital of Plymouth and killing at least 19 people in 1997.