“It’s something we’ve never really seen before,” Pat Rose, director of the Save the Manatee Club on the sudden rise of Manatee deaths claiming-The past five-year average shows 100 documented deaths each year... really? Almost a 1,000 Manatees died in 2017/18 due to red tide 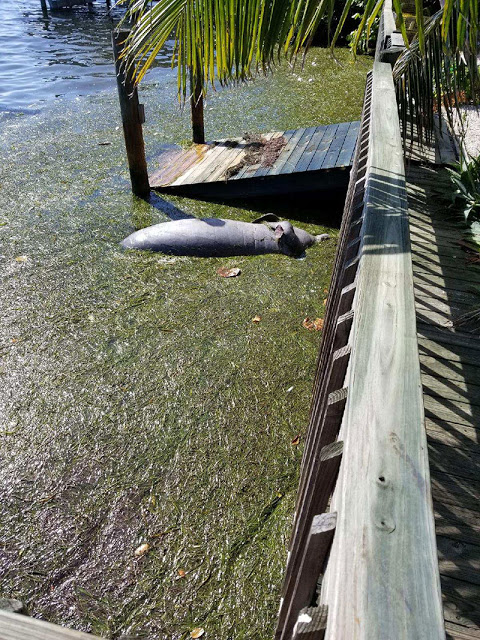 I stumbled on a news report this morning which beggars belief and shows, once again the "fake news and lies" we are being fed by Government Agencies today and the absolute incompetence of mainstream media's ability to properly research and check-out information given out by State-sponsored agencies. In the USA Today report, the article I read made my jaw drop by its inaccuracy.
According to the USA Today, quoting the Florida Fish and Wildlife Conservation Commission;

It’s turning out to be "another" deadly year for Florida manatees. More sea cow deaths have been documented through the first two months of the year than were recorded during those same two months in 2019 and 2020 combined, according to Florida Fish and Wildlife Conservation Commission records. Three hundred and seventeen manatee deaths occurred through Feb. 12, 2021. Former FWC commissioner Ron Bergeron said he thought the number was closer to 350 sea cows.  Manatee advocates confirmed the die-off, saying it’s another example of poor water quality.

Preliminary data from FWC showed that the 824 manatee deaths in 2018 from both red tide, sickness and human-related causes surpassed the previous record of 803 set during another red tide outbreak in 2013.Apart from the manatee, sea turtles and bottlenose dolphins deaths, it is thought "billions of fish" and countless birdlife have also died.Because of the partial U.S. government shutdown, NOAA has not provided updates for dolphins on its UME website.

267 tons of marine life along the Southwest coast of Florida. Full story...Below are examples of thousands of tons of dead marine life in Florida in 2018/17 and I have just scraped the surface, the official figures are lies, the death count is thousands of times higher than Florida Fish and Wildlife Conservation Commission claim! On December the 6th 2018, Fox13 claimed red tide blamed for the massive fish kill at Robinson Preserve Full story hereOn the 30th of October, 2018 AJC reported 10 tons of dead fish removed from Brevard County beaches Florida. Full storyOn the same day in Pinellas County, tons of dead fish, killed by red tide, continue to wash inshore in Pinellas County. Full storyUSA Today reported on the 16th of Oct, 2018 of the red tide fish kill littering Indian River Shores beaches with 60,000 dead fish, police say. Full story15th of October 2018, CBS Miami reported 14 tons of dead fish removed from Naples Bay Full storySept 2018, WJHG reported red tide causes thousands of fish to wash up in Panama City Beach. Full storyBradenton Herald, 27th of August reported the county had already collected about 241 tons of red tide-related debris left on Manatee County beaches, parks and waterways, cleaning up the majority of fish kills, officials announced during a news conference. Full storyOn the 16th of August 2018, WinkNews.com reported 309 tons of dead fish were cleared from Sanibel beaches. Full story hereOn the same day, Fox4 reported Over 3 million pounds (1360 tons) of dead fish cleaned up from Lee County waters, Full story hereOn the 6th of August Fox13 reported, tons of dead fish cleared from beaches on Anne Marie Island. Full story hereAt the end of July, the Miami Herald reported dead fish, birds, manatees, even a whale shark. As the toll from the worst red tide in a decade grows. Report here in April 2018, Spectrum News 13show a video of thousands of fish coming up dead in the Indian River Lagoon again. Brevard County officials think the warmer weather and algae blooms are to blame Full storyNov 2017, Fox News, reports, red tide causing thousands of dead fish to wash up on Sanibel Full storySept 2017, CBS reports,  South Florida Water Management District crew arrived early Wednesday to start cleaning up thousands of dead fish, full storyAug 2017, News Channel 8 reported, thousands of dead fish causing foul smell near Safety Harbor, Clearwater. Full story This is only part of the story, there have been many many more fish die off's around the shores of Florida which I have not added because they are smaller and I would be here forever if I did.
It is astonishing, jaw-dropping! THOUSANDS OF TONS (MILLIONS MAYBE BILLIONS) of Marine species dead along the entire Florida west coast since May