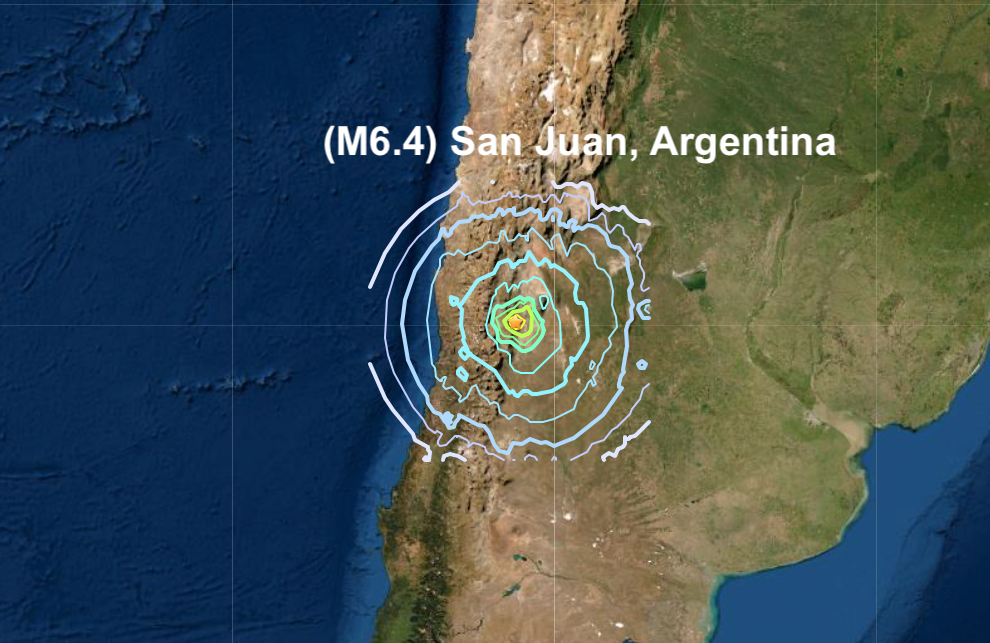 USGS
A very powerful shallow magnitude 6.4 quake rocked San Juan, Argentina this morning continuing an impressive uptick in volcanic and seismic activity to 2021. Today's quake is the 10th major quake, mag 6 or higher to be recorded in the first 19 days of 2021, 9 of the 10 have occurred along the Pacific Ring Of Fire. The earthquake of magnitude 6.8, reduced by USGS to a magnitude 6.4 struck west-central Argentina on Monday, followed by at least five aftershocks that shook buildings and sent products tumbling off supermarket shelves, but there were no immediate reports of injuries.

Tuesday, 12 January 2021 The mysterious year of 1957 which recorded the largest number of major quakes and sunspots in one year and started our planets incredible warming and increase in natural disasters draws an incredible resemblance to 2011 which broke the 1957 major quake record by just 3

Meanwhile,  a powerful earthquake that struck Indonesia’s Sulawesi island last week has now killed at least 84 people and displaced more than 30,000, according to search and rescue agency (Basarnas) data on Monday. Just two weeks into the new year, the world’s fourth-most populous country is again battling several disasters. Floods in North Sulawesi and South Kalimantan province each have killed at least five this month, while landslides in West Java province have killed at least 28, authorities said.
Mount Semeru, the highest volcano on Indonesia's most densely populated island of Java, spewed hot clouds as far away as 4.5 kilometres (nearly 3 miles) on Saturday. There were no immediate evacuations, but the National Disaster Mitigation Agency warned people who live in the villages on the slopes of the 3,676-meter (12,060-foot)-high mountain to be vigilant in looking for signs of danger. Agency spokesperson Raditya Jati said that people around the river basin on the slopes of the mountain should beware of high rainfall intensity that can trigger lava floods. 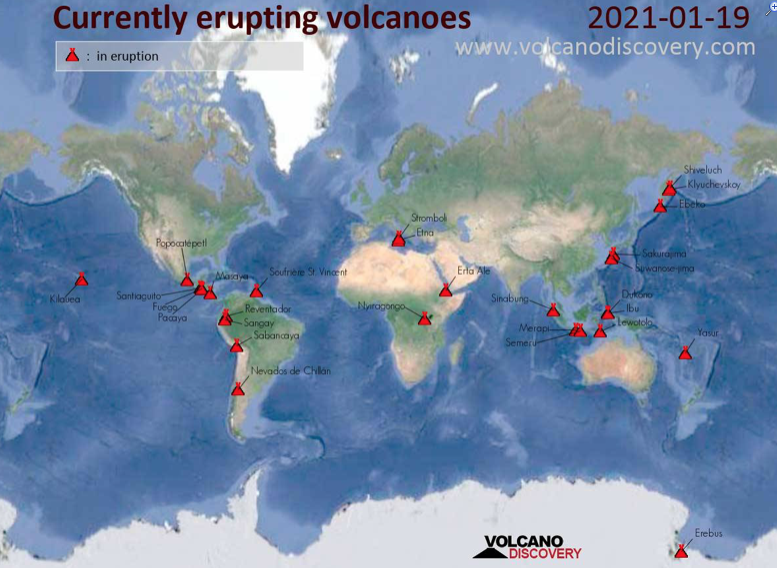 Volcano Discovery
At the moment a further 28 volcanoes are erupting around the world with an impressive 23 of them erupting around the Pacific Ring Of Fire, click on image to enlarge.
Major Quakes
Volcano Eruptions 2021
Front Page Headlines
at January 19, 2021