Temperatures across southeast Australia are set to soar for at least the next four days, with some areas reaching 45 degrees C, (113 deg F). Heat building over western NSW will push towards the coast over the weekend and early next week, forcing temperatures up to 16 degrees above average. 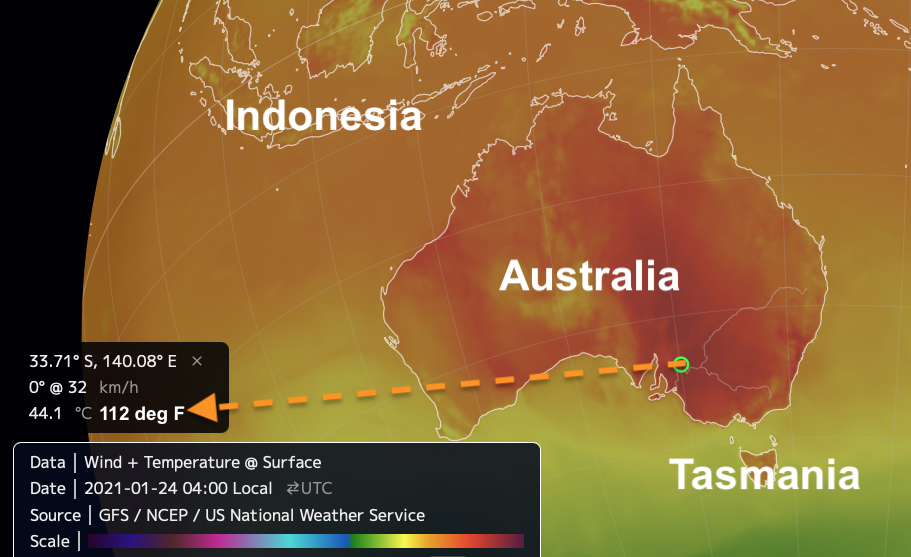 Temperatures across southeast Australia are set to soar for at least the next four days, with some areas reaching 45 degrees C, (113 deg F). Heat building over western NSW will push towards the coast over the weekend and early next week, forcing temperatures up to 16 degrees above average. "We have a large high-pressure system sitting out in the Tasman and inland trough and together they're acting to funnel in a hot northerly air mass into the state," the Bureau of Meteorology's Alexander Majchrowski said. "We'll be experiencing severe to extreme heatwave conditions for much of the state over the next several days." As a result, fire danger will be elevated on Sunday and Monday, with the RFS warning people should use the next few days to prepare.

Thursday, 21 January 2021 "A mixture of anxiety and disbelief!" Almost the whole of England, Wales and Northern Ireland are subject to flooding warnings for rain until Thursday morning: Thousands of people were being evacuated from their homes overnight as Storm Christoph caused widespread flooding across the UK.

"People need to take this seriously ... this season we haven't had these heightened fire dangers but we have now got to be prepared," RFS NSW director Peter McKechnie told reporters on Thursday. The Bega, on the south coast, is expected to reach at least 39 degrees on Monday, and western Sydney will be in the same range on Sunday and Monday. Other parts of southern NSW could experience temperatures up to 45 degrees on Sunday and Monday, according to BOM. Australia Day will be hot too, with temperatures unlikely to cool off until Wednesday. Victoria will also see temperatures building to a peak on Monday, with most major centres in the state's north surpassing 40 degrees. NSW-Victoria border towns could endure temperatures up to 44 degrees.

A cool change is due to hit the state's southwest on Monday but won't reach the northeast before early Tuesday morning. Victorians could find themselves sweating through the night on Sunday and Monday as temperatures stay high even after the sunsets. BOM meteorologist Jonathan How said conditions over the weekend in southeast Australia would be the warmest since January 2020. He said relief would not arrive for at least four days. "Summer is really back in full across southeast Australia ...

Saturday, 16 January 2021 Monster Storms! Alaska's Aleutian Islands hit with another "Bomb Cycle" Hurricane winds creating chaos from North Dakota to Kansas with another mammoth storm system developing in the North-East of the US bringing with it heavy snow affecting millions as North Dakota smashes heat record

15 million Australians will experience the scorching heatwave conditions over the next few days," Mr How told the Nine Network on Friday. The heatwave has lifesavers on high alert, with Surf Life Saving NSW CEO Steven Pearce saying this is "probably the weekend we've been looking out for". The heat is likely to drive people to the beach and a large swell will pose some "real challenges" for lifesavers and lifeguards, Mr Pearce told reporters. More than 1000 people have required rescuing since Christmas Day. A severe to extreme heatwave is already besetting southwest Western Australia and western South Australia. A low-intensity heatwave is expected to persist in SA until next week.
Extreme Weather 2021
Front Page