It's that time of the year again: Fires fueled by strong Mediterranean winds have raced across the Marseille region of France, leaving at least 22 people injured, destroying businesses and forcing the evacuation of 2,700 tourists 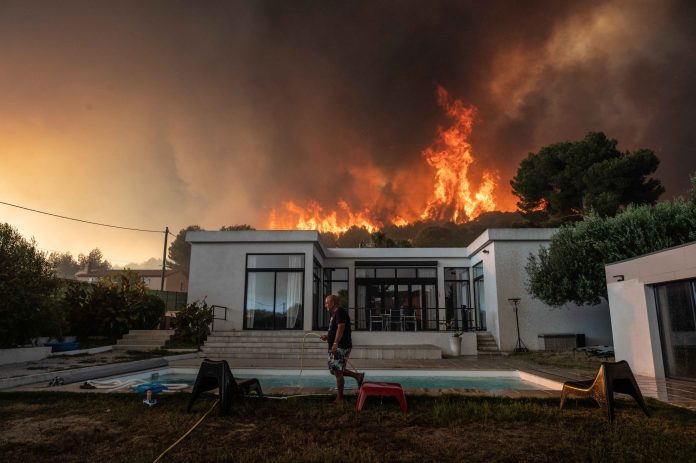 Credit News1
Fires fueled by strong Mediterranean winds have raced across multiple towns in the Marseille region of France, leaving at least 22 people injured, destroying several businesses and forcing the evacuation of 2,700 tourists, nursing home residents and others. Some 1,800 firefighters, backed by planes and helicopters, battled the worst fire through the night around the town of Martigues. They were still working Wednesday to extinguish it more than 14 hours after it broke out Tuesday, according to the local fire service. Its flames spread quickly from a wooded area toward the sea, eight kilometers (five miles) away, sweeping through residential areas and multiple campgrounds.
Firefighters rushed to evacuate campers via land and sea. The cause of the fires is not known. Eight civilians and 14 firefighters suffered minor injuries in the Martigues blaze and five others that erupted in the area Tuesday, the fire service said. The other fires were brought under control in the towns of Port-de-Bouc, Aubagne-Carnoux, Gignac-la-Nerthe and Fontvieille. Given continued winds Wednesday morning and dry and hot weather across France, authorities have banned any controlled fires in the area or construction work involving sparks or hot equipment until the fires are extinguished. Interior Minister Gerard Darmanin rushed to the site overnight, and firefighting teams were sent in from other regions to help.
Wildfires 2020
Front Page
at August 06, 2020