The last fully intact ice shelf in the Canadian Arctic has collapsed, losing more than 40% of its area in just two days at the end of July; The shelf’s area shrank by about 80 square kilometres. By comparison, the island of Manhattan in New York covers roughly 60 square kilometres. 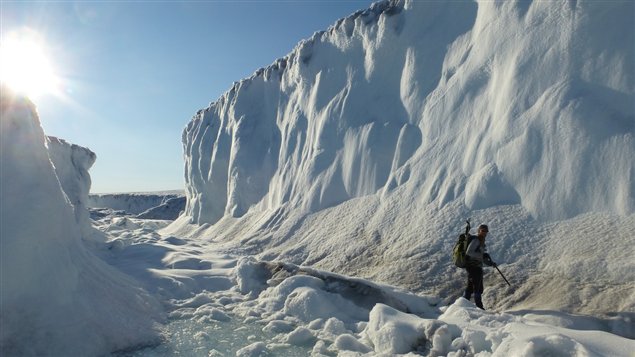 Credit Radio Canada International
The Milne Ice Shelf, a fragment of the former Ellesmere Ice Shelf, is located in the Qikiqtaaluk Region, Nunavut, Canada. It is the second-largest ice shelf in the Arctic Ocean. Situated on the north-west coast of Ellesmere Island, it is located about 270 km (170 mi) west of Alert, Nunavut. In 1986, the ice shelf had an area of about 290 km2 (110 sq mi), with a central thickness of 100 m (330 ft). Despite being the last ice shelves in the Northern Hemisphere to be fully intact, over 40% of the sheet collapsed within 2 days at the end of July 2020 according to Wikipedia.

The last fully intact ice shelf in the Canadian Arctic has collapsed, losing more than 40% of its area in just two days at the end of July, researchers said on Thursday. The Milne Ice Shelf is at the fringe of Ellesmere Island, in the sparsely populated northern Canadian territory of Nunavut. “Above normal air temperatures, offshore winds and open water in front of the ice shelf are all part of the recipe for ice shelf break up,” the Canadian Ice Service said on Twitter when it announced the loss on Sunday. “Entire cities are that size. These are big pieces of ice,” said Luke Copland, a glaciologist at the University of Ottawa who was part of the research team studying the Milne Ice Shelf. The shelf’s area shrank by about 80 square kilometres. By comparison, the island of Manhattan in New York covers roughly 60 square kilometres. “This was the largest remaining intact ice shelf, and it’s disintegrated, basically,” Copland said. Full story

While the world understandably looks toward the Coronavirus and the social and political problems of America, global warming, or climate change, whatever you want to call it has been relatively forgotten in 2020. However, an exceptionally prolonged heatwave has been causing havoc in Northern Siberia since June with temperatures up to 10°C (50F) above average. Further West, the northernmost inhabited Arctic town, Longyearbyen on the Norwegian archipelago of Svalbard, saw a new record temperature of 21.7°C (72F) on 25 July, compared to July average of 5.9°C, (43F). The Arctic has been warming at twice the global rate for the last 30 years, due to a process known as Arctic amplification. But this year, temperatures in the polar region have been intense. The polar sea ice hit its lowest extent for July in 40 years. Record heat and wildfires have scorched Siberian Russia. Summer in the Canadian Arctic this year in particular has been 5 degrees Celsius above the 30-year average, according to Reuters. TBW
Climate Change 2020
Front Page Headlines
at August 07, 2020