It is a political, religious, social and even technological mishmash which cannot possibly fuse together. We have become, one or the other and never the twain shall meet in our complicated world: As Daniel prophesied our society is "Feet of mingled iron and clay." 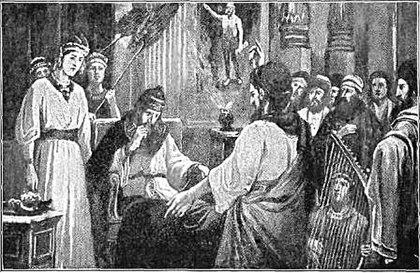 Daniel Interprets the Dream of Nebuchadnezzar, credit Wikipedia.
The world at this moment is probably more divided than any time since the second world war and it's getting worse by the day.
In the  Book Of Daniel, chapter 2, Daniel interpreted a dream of Nebuchadnezzar II, king of Babylon. The king saw a gigantic statue made of four metals, from its gold head to its feet of mingled iron and clay; The four metals represented the mighty empires in the history of the world.
The statue had a head of gold and was said to represent Babylon, its chest and arms were silver and represented Media-Persia. The belly and thighs were of bronze and represented the mighty Greek empire. Its legs were said to be of Iron and represented the Roman Empire and its feet were clay and iron and thought to represent the Anglo-American period of now.
As Nebuchadnezzar watched, a stone "not cut by human hands" destroyed the statue (this system of things) and became a mountain filling the whole world and becoming Jehovah's Kingdom. Our world today, or this generation is thought to represent the feet of mingled iron and clay but the idea has given many scholars a headache as to what the iron and clay mix could possibly mean. If we look back at 2020 we can begin to understand just what the "feet of mingled iron and clay," may mean.
Feet of mingled iron and clay
It is a political, religious, social and even technological mishmash which cannot possibly fuse together. We have become, one or the other and never the twain shall meet in our complicated world which has become everything the Bible prophesied would happen. In Matthew 24, Jesus told us "Many false prophets will arise and mislead many; and because of the increasing of lawlessness, the love of the greater number will grow cold."
In Timothy 2, verse 3 we read Evil in the Last Days... 1 But understand this: In the last days terrible times will come. 2 For men will be lovers of themselves, lovers of money, boastful, arrogant, abusive, disobedient to their parents, ungrateful, unholy, 3 unloving, unforgiving, slanderous, without self-control, brutal, without the love of good, 4 traitorous, reckless, conceited, lovers of pleasure rather than lovers of God, 5 having a form of godliness but denying its power. Turn away from such as these! 6 They are the kind who worm their way into households and captivate vulnerable women who are weighed down with sins and led astray by various passions, 7 who are always learning but never able to come to a knowledge of the truth. 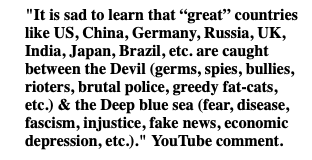 As the new decade heads toward only its ninth month and the last weekend of August, the madness of 2020 takes another jump into the dark abyss. Riots, or, "peaceful protests," whichever side of the centre line you stand, (feet of mingled iron and clay) countries around the world are beginning to implode from fear of the future.
Sweden...Feet of mingled iron and clay
In Sweden, which for all intent and purpose prides itself as a very outward-looking peaceful and tolerant society, suddenly finding themselves in the grip of far-Muslim riots in Malmo this weekend, after a video showing a far-right activist burning the Koran has shocked the country to its core.
Malmo is an industrial city of 320,000 inhabitants. In 2017, more than half the city's population, 53.6 per cent, were either foreign-born or had at least one foreign-born parent. Sweden has also recently been labelled the rape capital of Europe. According to Wikipedia, Ever since the collation of crime statistics was initiated by the Council of Europe, Sweden has had the highest number of registered rape offences in Europe by a considerable extent.
Norway...Feet of mingled iron and clay
A Norwegian anti-Islam group staged a protest on Saturday, culminating in an activist tearing pages from a Koran. The event was wrapped up after a scuffle with counter-protesters, who managed to bypass the police perimeter. The rally outside the parliament building in Oslo was organized by a group called Stop Islamisation of Norway, or SIAN. Some of their past rallies have ended with clashes between group members and their political opponents. The police had a heavy presence at the scene in advance of Saturday’s event. The protest escalated into violence when a female activist held up a copy of the Koran and tore pages from the Islamic holy book. Angry counter-protesters then launched an attack, and the police rushed to intervene. One person was reportedly injured, and several others were arrested.
Germany...Feet of mingled iron and clay
This weekend the German government condemned the "unacceptable" behaviour of "protesters" during a mass rally against coronavirus restrictions after some attempted to storm the Reichstag parliament building. Police said about 38,000 people, double the number expected, had gathered in Berlin on Saturday to protest against restrictions imposed to curb the spread of the coronavirus, such as the wearing of masks and social distancing. Late Saturday, several hundred protesters broke through barriers and a police cordon to climb the steps leading to the entrance to the Reichstag.
The United Kingdom...Feet of mingled iron and clay
More than 10,000 COVID conspiracy theorists gathered in London this weekend who believe Bill Gates is the leader of a global plot to vaccinate people against Covid-19. The huge crowd of anti-vaxxers led by David Icke of all people gathered to argue that the virus is a lie spread in a secret global plot organised by Bill Gates. The anti-lockdown protesters who believe coronavirus is a hoax gathered for the 'Unite for Freedom' rally which started at noon in the capital on Saturday. Demonstrators called for an 'end to Government lies' and the restoration of all freedoms as they marched past Downing Street towards the Houses of Parliament.
The United States...Feet of mingled iron and clay
Portland Police are investigating after they responded to a shooting in downtown Saturday night and found a victim with a gunshot wound to the chest. 1 person is dead after a shooting during protests in downtown PortlandThe shooting happened as protesters converged on the city for the 94th night in a row. Officers heard sounds of gunfire around 8:46 p.m., Portland Police said in a statement. When officers responded to the area of Southeast 3rd Avenue and Southwest Alder Street, they found the victim. Medical personnel determined the person was dead.
As most sports shut down this weekend in the US after a black man was shot in the back by Police riots continue in many cities across America.
Canada...Feet of mingled iron and clay
Protesters in Montreal pulled down and defaced a statue of John Macdonald, Canada's first prime minister, as police stood by, echoing attacks on controversial historical figures in the US. The statue's head was broken off as it slammed to the ground from its high pedestal on Saturday in Montreal's Dominion Square. Activists were shielded from view with umbrellas and sheets as they unbolted the statue, which was pulled from behind with a strap around its neck.
Belarus...Feet of mingled iron and clay
Thousands of pro-opposition women marched and tried to breach a police cordon in central Minsk on Saturday while ‘motor rallies’ were held in support of President Alexander Lukashenko, as political turmoil continues in Belarus. The women were carrying flowers, white-red-white flags and white-red-white umbrellas, and chanting slogans such as "Shame!", "We will not forget, we will not forgive!" and "Long live Belarus!" The protesters had planned to march along Independence Avenue, but minibuses blocked their way.
Left or Right,  Fascist or Antifa, BLM or White Supremacy, Republican or Democrat, Conservative or Labour, Gay or Straight, Christian or Muslim, Jew or Arab, West or East its feet, of mingled iron and clay. A world is driven right down the middle by the great deceiver.
Space Weather 2020
Front Page Headlines
at August 30, 2020

Feet of iron and clay. The iron, anti-Christ, is the angel Apollyon, seed of Satan, the 1st in authority beast who comes on the scene when he rises from the bottomless pit as king of the locusts at the 5th trumpet. Da 9:11. The clay, false prophet, is the man, 666, who is here now. He deceives with the mark of the beast, confirms the covenant, has the anti-Christ image placed in tho temple day 1230, which starts great tribulation. Mt 24:15,21,22. Satan is the 4th beast, the legs of iron. Da 7:23. The coming world kingdom is his, the anti-Christ and the false prophet serve him.

Can you decipher that into English, please?