Evidence suggesting Israel could be behind the massive explosion which killed 150 people, injuring thousands in Beirut after a video surfaces of Israeli Prime Minister Benjamin Netanyahu warning the United Nations that Hezbollah was producing and stockpiling missiles in the vicinity of the blast back in 2018 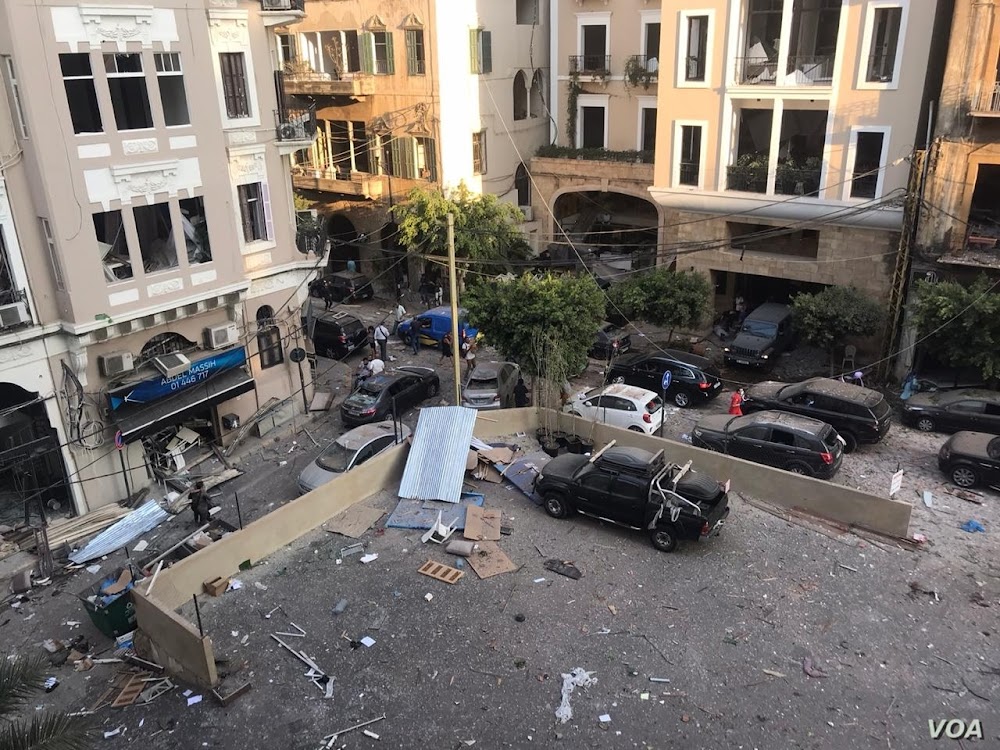 Anchal Vohra Wikipedia. The aftermath of the Port of Beirut explosions on 4 August 2020.
As the dust settles on Beirut after a massive explosion killed 150 people, injuring thousands and causing 50% structural damage to a city of 2.5 million people and leaving 300,000 homeless a few questions have come to lite.
Beirut is the headquarters of Hezbullah, the Shia Islamist political party and a militant group whose arch-enemy is Israel and is sponsored by the Ayatollah Khamenei the leader of Iran's Israel hating government.
A couple of weeks ago, the BBC reported Israel's military had opened fire on Hezbollah militants who were trying to "infiltrate Israel's border. The Israel Defense Forces (IDF) said up to four militants crossed the border in the Mount Dov area, part of the Israeli-occupied Syrian Golan Heights. The area had been tense for days after the death of a Hezbollah fighter. He was killed in an alleged Israeli airstrike in Syria. Israel, which has neither confirmed nor denied it carried out the strike in the early hours of last Monday, had warned Hezbollah not to retaliate.
In retaliation, Israel launched air raids on military targets in southern Syria late on Monday. The army said it was retaliating after an attempt to lay explosives in the Golan Heights, occupied by Israel since 1967. Syrian state-run news agency Sana said Israeli helicopters attacked Syrian army positions near Quneitra in the south but caused only material damage. It also said air defences had gone into action near the Syrian capital. Several Israeli media outlets reported that Monday's actions were in response to an increased threat from the Iran-backed Lebanese group Hezbollah, which has a significant presence in Syria, according to Aljazeera. 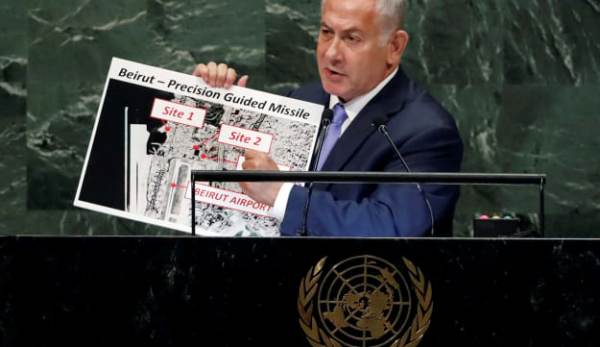 Screengrab from UN video.
In September 2018 the Israeli Prime Minister Benjamin Netanyahu took to the stage of the United Nations, warning global leaders that Hezbollah was producing and stockpiling missiles in the vicinity from where the blast occurred on Tuesday, see the video below. While the world has been understandably watching developments of Covid-19, Israel has been at war with the Hezbollah, Iran partnership and this war has not made the headlines on Western media outlets.
Back in early July, a chlorine gas leak at a petrochemical centre in southeast Iran sickened 70 workers. Most of the workers at the Karun petrochemical centre in the city of Mahshahr in southeast Khuzestan province were released after undergoing medical treatment. Meanwhile, in the city of Ahvaz, also in Khuzestan, a fire at the Zergan power plant was ignited when a transformer exploded. The blaze was contained by firefighters after two hours of battling the blaze. Mohammad Hafezi, the power plant's health and safety manager, told IRNA the cause of the fire was under investigation. The two incidents in Iran's oil-rich Khuzestan come after a fire and explosion at a centrifuge production plant above Iran's underground Natanz nuclear enrichment facility early in June. Officials said the cause of the fire at Natanz is known to officials, but won't be immediately released for "security reasons. Another explosion from a gas leak in a medical clinic in northern Tehran killed 19 people in late June.Sabotage or bad luck? Iran has been suffering a chain of catastrophes in 2020. Another three mysterious explosions at the Iranian Natanz nuclear facility in Iran has led to many questions. A former official suggested the incident could have been an attempt to sabotage work at the plant, which has been involved in activities that breach an international nuclear deal.
In early July Israeli F-35 stealth fighter jets bombed a site located in the area of Parchin, which is believed to house a missile production complex — an area of particular concern for the Jewish state, in light of the large number and increasing sophistication of missiles and rockets in the arsenals of Iranian proxies, notably Lebanon’s Hezbollah. Fighter jets from the IAF’s second F-35 squadron, the Lions of the South, flew over southern Israel (IDF spokesperson) Neither of these claims was confirmed by Israeli officials, who have been mum on the reports. TBWNineteen people were killed in an explosion at a medical clinic in the north of the capital Tehran, which an official said was caused by a gas leak. On June 26, an explosion occurred east of Tehran near the Parchin military and weapons development base that the authorities said was caused by a leak in a gas storage facility in an area outside the base.The reported Israeli strikes followed an alleged Iranian attempt to hack into Israel’s water infrastructure in April, an effort that was thwarted by Israeli cyber defences, but if successful could have introduced dangerous levels of chlorine into the Israeli water supply and otherwise seriously interrupted the flow of water throughout the country according to the Times of Israel.Security sources have said that Iran would retaliate if it becomes clear that Israel, or the United States, have been behind any attempt targeting Iran’s nuclear sites. A Saturday article by Nour News said media reports crediting Israel for an alleged cyber attack targeting Iran’s Natanz nuclear facility mean that the regime itself would be posed to similar threats. The article, which had no byline, said the international community should be more concerned about cyber sabotage attempts targeting Iran’s nuclear facilities as they could lead to nuclear leaks with environmental ramifications of unknown magnitude. It added, however, that despite Israel’s policy of keeping silent on sabotage acts targeting Iran’s nuclear sites, such moves are ultimately attributed to the regime given its long records of hostility towards Iran and its peaceful nuclear activities. The article by Nour News said Israel should await serious consequences if it crosses Iran’s "red lines." PressTV
“Cheetahs of the Homeland”
In a further twist, an online video and messages purportedly claiming responsibility for the fire that analysts say damaged the centrifuge assembly plant at Iran’s underground Natanz nuclear site deepened the mystery around the incident — even as Tehran insisted it knew the cause but would not make it public due to “security reasons.” The multiple, different claims by a self-described group called the “Cheetahs of the Homeland” included language used by several exiled Iranian opposition organizations.
The Plagues Of Iran 2020
It has been a lousy year for the Iranian government so far and it has just gotten a whole lot worse. Just three days into 2020, Major General Qassem Soleimani, the commander of the Quds Force of Iran’s Islamic Revolution Guards Corps (IRGC), and Abu Mahdi al-Muhandis, the second-in-command of Iraq's Popular Mobilization Units (PMU), were killed in US airstrikes in the Iraqi capital Baghdad.
US Attack
Iran's administration called the attack an act of international terrorism and vowed an act of ‘vigorous revenge,’ however, the vigorous revenge went drastically wrong when a Ukrainian 737 with 170 people on board was shot down by nervous Iranian defences in the aftermath of the attacks. The strikes were codenamed Operation Martyr Soleimani - in retaliation for the killing of Iranian General Qasem Soleimani in a US air raid last week. The Iranian administration then spread misinformation following the crash of a Ukrainian passenger plane near, claiming the 737 had crashed due to engine failure which caused anti-government protests which resulted in the deaths of many innocent Iranian people.
xx
Boogaloo 2020
Home Page
at August 06, 2020