A new locust swarm arrives in Argentina from Paraguay, swarms moving north into Brazil: Meanwhile risk of swarm migration from the Horn of Africa prevails: China is the latest country infected. 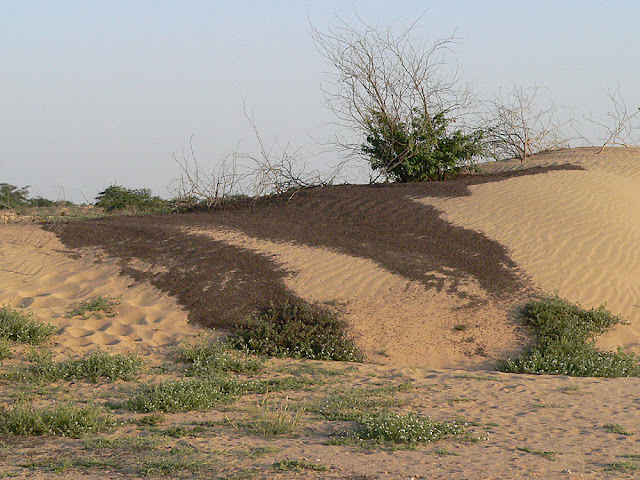 Detection of a new locust swarm from Paraguay (Translated from Spanish). The second swarm arrives.

There are two swarms that are in our country, (Argentina) one in the province of Entre Ríos and the other in the area of Formosa.

A month ago Argentina and Brazil said they were monitoring the movement of what was then a 15-square-kilometre locust swarm. The three countries are among the world’s biggest soybean exporters.

Buenos Aires - The National Service for Agrifood Health and Quality (Senasa) confirms the detection of a new swarm in Formosa, which came from Paraguay. In the region, there are three locust swarms detected, one in the Central Chaco area of ​​Paraguay, the other two in our country. So far this year, this is the second entry of the plague from the neighbouring country.

The other manga is currently in Entre Ríos, in the Federal Department. The manga that entered Argentina in mid-May through Formosa, crossed Chaco, Santa Fe, Corrientes, and on Sunday reached the province of Entre Ríos as predicted by Senasa. In Corrientes, with low temperatures, and therefore low mobility, the plague was present for a month, during which phytosanitary treatments were carried out together with the Plant Production Directorate that allowed it to decrease its population density.

Currently, it articulates with representatives of producer federations, municipalities and provinces to implement new phytosanitary treatments. On the other hand, the swarm detected in Guadalcazar Formosa, advanced in a southern direction crossing National Route 81 at the height of Laguna Yema - Pozo del Mortero. The north wind allowed it to move quickly and is expected to approach the Río Bermejo today. In this sense, the alert is extended to the Chaco province. In parallel, permanent communication is maintained with the National Service of Plant and Seed Quality and Health (Senave) of Paraguay, in order to have information on the third round that could approach our country in the short term, so that the alert remains for the province of Formosa and is incorporated for Salta.  Senasa

China is the latest country to join the ever-growing list of countries being devastated by locust invasions stretching 3 continents including South America, Africa the Middle East, Arabia, Indo Pakistan, Nepal, Myanmar all struggling to control trillions of locusts. TBW

Unprecedented rainfall which started back in early June and is now still raging has caused horrendous floods affecting untold million including many hundred dead along an immense portion of the globe and shows no stopping anytime soon. From West Africa, the Middle East, Arabia, Indo Pakistan, Bangladesh, Myanmar, China and Japan have all received Biblical amounts of rainfall. Stranger still all the regions mentioned above, (except Japan) are all being crippled by another Biblical plague, unprecedented numbers of Locust swarms.

Risk of swarm migration from the Horn of Africa prevails.

In Kenya, locust swarms have declined in the northwest, mainly in Marsabit county, but continue to be present in Turkana where aerial and ground control operations are in progress. Most of these swarms are still expected to migrate northwards to Ethiopia and Sudan via South Sudan. There is a risk that a few swarms may cross the border into northeast Uganda. The scale of the migration of remaining swarms from Kenya is likely to be smaller than previously anticipated due to ongoing control operations.

In Ethiopia, ground and aerial control operations continue mainly against immature swarms in the northern Rift Valley and in the Harar Highlands in the east. There are reports of locusts in the south coming from Kenya, and locusts are present in the northern highlands of Amhara and Tigray. Timely reporting has been compromised due to Internet disruptions. More breeding is expected during the summer, which may be supplemented by a few swarms arriving from Yemen.

In Somalia, ground and aerial control operations are underway against immature swarms on the northern plateau between Hargeisa and Garowe. The swarms are moving eastwards across the north and they could continue to migrate across the Indian Ocean to reach the summer breeding areas along both sides of the Indo-Pakistan border.

In Yemen, heavy rains fell in the interior and flooding occurred in Wadi Hadhramaut. Breeding continues throughout the interior as well as in some coastal areas that have given rise to numerous hopper bands and swarms. There is a risk that some of these swarms may appear on the Red Sea coast and breed in areas of recent rainfall. Survey and ground control operations are underway in a few places. No locusts were present in adjacent areas of southwest Saudi Arabia.

In Sudan, low numbers of mature solitarious adults are present in the Nile Valley, near Kassala and in White Nile and North Kordofan states. Control was carried out against local breeding near Atbara. No swarms have been detected from Kenya.

In Oman, control operations are in progress against hopper groups and bands along the southern coast near Salalah while low numbers of solitarious mature adults are present in the adjacent interior. There have been no reports of swarms appearing on the east coast from the Horn of Africa.

In Pakistan, control operations are in progress against hopper groups and bands in the Nagarparkar area of southeast Sindh near the Indian border. Groups of adults are maturing in Tharparkar and Cholistan deserts where laying is expected in areas that have already received monsoon rains. This will cause a further increase in locust numbers as hatching and hopper band formation to occur in the coming weeks.

In India, adult groups and swarms are maturing throughout Rajasthan where laying is underway in many areas. So far, a few hopper groups and bands have formed but substantial hatching is expected in the coming weeks. Control operations are in progress. There have been no recent reports of additional locusts in the northern states as most of the adult groups and swarms have returned to Rajasthan as expected. There remains a risk that a limited number of swarms could migrate from northeast Somalia to the Indo-Pakistan border area during the remainder of this month.

In Iran, a few small residual infestations remain in Khorasan province and control operations are in progress.

In West Africa, low numbers of solitarious adults are present in southeast Mauritania, northern Niger, and parts of western and eastern Chad. While the threat of invasion by swarms is declining, continued vigilance, preparedness, and increased surveillance remain paramount. FAO


Hogorina
Answered 59m ago
JESUS WAS BORN TO SPEAK FOR HIS FATHER. HE WAS NOT PART OF THIS LIFE. CHRIST NEVER CUDDLED A CHILD IN HIS ARMS. CHRIST HAD NOTHING TO LAUGH ABOUT. HE DID WEEP OCCASIONALLY IN ATTEMPTING TO SO KINDLY WARN HIS LISTENERS OF THE AFTER LIFE. TO LAUGH OR SMILE WAS UNBECOMING FOR CHRIST FOR TO LAUGH OR SMILE IS AND WAS A FORM OF AGRESSION