An accident waiting to happen: In a world focused on one subject other important and sometimes frightening news is happening around the world: A powerful mag 6.4 rocks the Fukushima area: Japan's 2nd major quake in 24 hrs 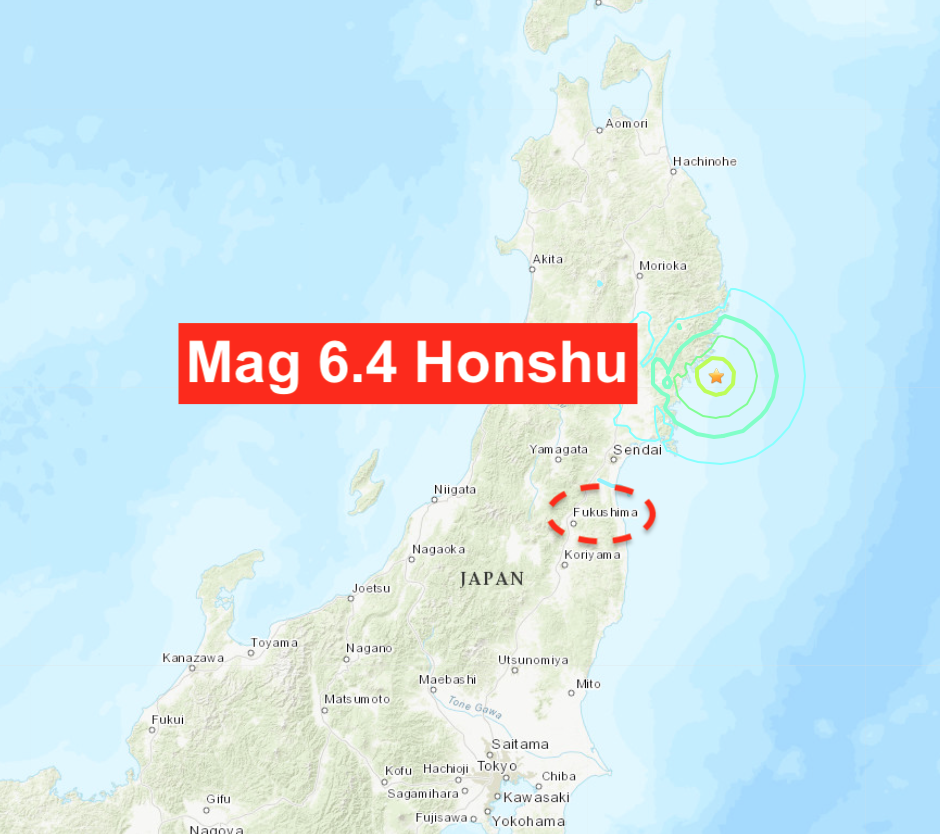 In a world focuses on one subject it is hard to find other important and sometimes frightening news happening around the world, for instance, you would be probably surprised if I was to inform you a powerful mag 6.4 - 25km SE of Ofunato, Japan (reduced by USGS to a 6.3) occurred last night off the east coast of Honshu, Japan, the same area as the 2011 Fukushima disaster which killed 22,000 people, hopefully, it's a one-off but the 2011 disaster started with mag 6., foreshocks. A mag 4.5 aftershock followed last nights major quake.

An accident waiting to happen

There have been 10 major quakes off the coast of Fukushima since the disaster of March 2011, the biggest being a magnitude 7.1 in April 2011.

Yesterday a powerful magnitude 6.9, (reduced by USGS to a 6.6) rocked the North Pacific just Southeast of Japan. (Why does USGS reduce nearly all major quakes and never update them?)

Last nights magnitude 6.4 was the 5th major quake of April 2011, however, they have all been recorded in the last 7 days. The total number of major quakes for the year so far is 36.

Hi Folks,
Yes this is a disaster waiting to happen. Go to google and type in. Japan: drones captured tonnes of nuclear waste. From the research I've done there's between 20 to 30 million one tonne bags right along the shoreline. The honest Japanese government of course is hoping for a earthquake or tsunami to take the bags into the ocean so they can wash their hands from it and kill whatever is left alive in the pacific ocean. Anybody still think the governments of the world care about the ordinary people out there ?

Re your question Gary; 'Why does USGS reduce nearly all major quakes and never update them?'

The reason USGS reduces the magnitude of certain EQs (THEY also eliminate many altogether!!!) is because USGS is a criminal-government agency. IOW, just like the corona virus scare, THEY are up to no good.

On the one hand, they are under-reporting EQ magnitudes to 'try and prevent panic' in the populace re the upcoming pole shift. According to our off-world (trust-worthy) ET brothers and sisters, this next pole shift is going to be a doozy which will destroy nearly all of the global infra-structure and kill at least 70% of the living populations by the time the shift (AND its after-effects over the following 2 years) is over. Way too many details to get into here.

On the other hand, the criminal government is purposely frightening the be-Jesus out of nearly everyone with the fake virus scare simply for control over the populace during these END TIMES. These are the types of things criminals do!!!

Viruses, bacteria and pathogens of every kind have always existed. Smart people know how to deal with and protect themselves from harm. It’s the dumb ones (easily 90% of the global population) that panic!!!

How about just flying over it and dropping concrete or just blow it completely off the map.