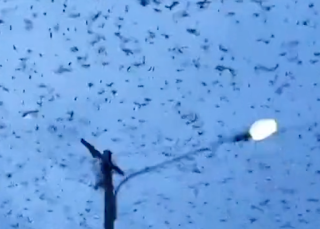 Hundreds of thousands of bats have invaded the town of Ingham in Queensland, Australia, and residents are fed up. The bats now outnumber the residents in the town and upset locals have asked their council to do something about it. The animals have caused chaos, with residents complaining about the smell, the dirt and the noise. However, the bats are protected by law and cannot be culled. Local authorities now say they are trying to "persuade" the bats to move back to their habitat. Ramon Jayo says his community is fed up with it. "The stench is horrific when you are under the bats you have little spiders and mites and the bats are peeing on you." The bats now outnumber the residents by the hundreds of thousands. Ingham's bat population has exploded in the last couple of years. The potential for another animal to human coronavirus is very worrying here especially if the bats are urinating on people.

That is interesting. Bats are protected by law but camels are shot dead! I think Australia is completely under the spell of the anti-Christ! Camels were executed by humans with serious riffle power flying above them in helicopters because they drink too much water. When I wrote about this in complaint on social media sites several Aussies responded to my posts attacking me! Lol...they said the camels are a nuisance, they are not native, they are feral, and basically the attitudes were who cares get rid of them, all while their wildlife has been reduced by a billion or so dead from fires and droughts!
Last summer Aussies had bats falling dead out of trees from the heat. Now bats are too numerous, a risk to spread disease, and looking like much more of a nuisance then the camels were but its unlawful to "cull" them. Do you think this is natures way of giving Australia a big middle finger flip off!!? I'd say yes and maybe rightfully so, sorry to say it.