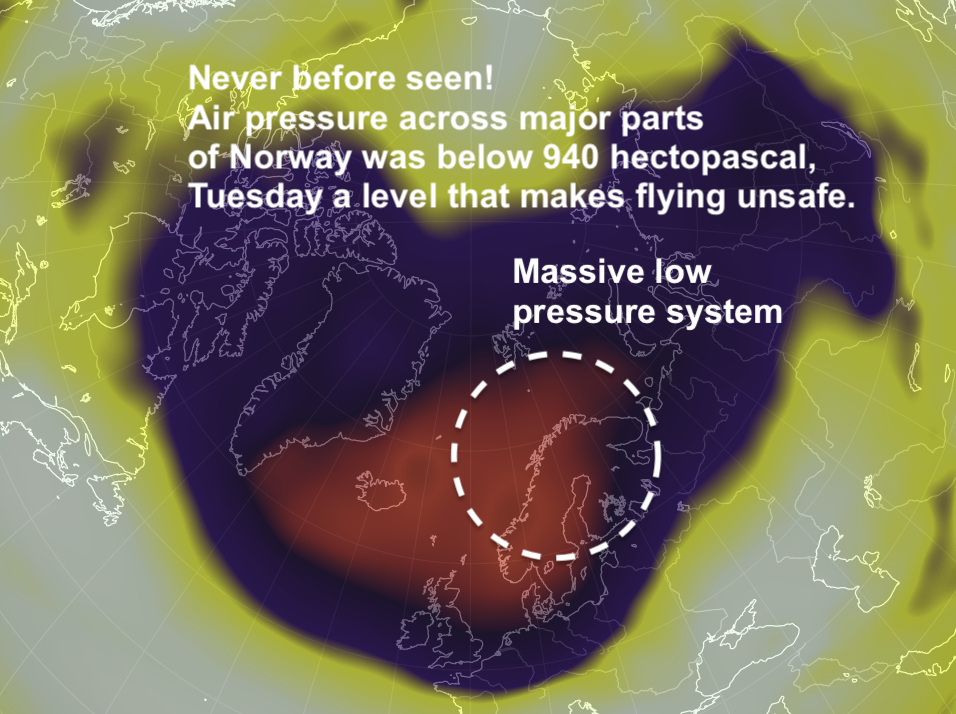 Airline company Widerøe has in its almost 90-year history never experienced this kind of weather, ever.

The past months have seen extraordinarily rough weather along the north Norwegian coast. Early this week came another extreme. The air pressure dropped to a level not seen in several decades. According to the Norwegian meteorological institute, the air pressure across major parts of the region was below 940 hectopascal, a level that makes flying unsafe.

The Widerøe company that serves most of the regional routes put almost its whole aircraft fleet on the ground. Our smallest aircraft type Dash 100, 200 and 300 can not fly with pressure lower than 948 hectopascals. More than 2,000 passengers were affected by weather conditions. Only on Tuesday afternoon did the pressure return to a level that allows aircraft to operate normally. The low pressure also resulted in high waters levels along the Norwegian coast. In Tromsø, the north Norwegian town, the seawater was on Tuesday 354 cm higher than normal, the Meteorological Institute informs. The Barents Observer

The past months have seen extraordinarily rough and mild weather in the North Atlantic
this winter. In January numerous stations recorded around 1050 mbar across southern England and Wales, almost up to 1049 mbar in southeast Ireland. Atmospheric pressure continued to rise across central Europe and the Balkans where 1047-1049 mbar was reported. Very high, near record-breaking values also across Benelux!

Earlier this month many parts of Europe enjoyed summer temps in mid-winter with Puerto De La Cruz topping the list with a mighty, 30 deg C, (86 deg F) and Valencia hitting 29.4 deg C, (85 deg F) almost double the average temperatures for the time of the year, smashing the old record of 27 deg C, (80 deg F).
Extreme warmth across the southern half of Europe brought exceptional temperatures across Spain, southern France, and NW Italy. Dry Foehn winds have resulted in extremely high early February values with locally 26-28 °C peak afternoon temperatures. Turin and Cuneo in NW Italy reached almost +27 °C – the hottest temperatures ever recorded in Piedmont region (NW Italy) during winter! Southern Switzerland stopped at +24 °C while Valencia reported +28.4 °C! That is *exceptional* for this period. There will be the final day of extreme warmth tomorrow before colder air mass spreads from the north and brings back winter with snow cold into the Balkans through mid-week.
Over the Iberian peninsula the temperatures locally climbed even higher than in the previous two days, Valencia hit +28.4 °C! Santander / Parayas reported +27.8 °C, Huercal Overa, and Zumaya – faro hit +27.3 °C. The Italian station Capo Bellavista (on the eastern part of Sardinia island) hit +27.0 °C and Torino / Caselle reported +26.7 °C! Also, southern France was exceptional – Biarritz hit +26.6 °C! Foehn winds also brought a remarkable +23.9 °C to Grono and Magadino / Cadenazzo in southern Switzerland. It was also very warm all over the Mediterranean and most of the Balkans again, except some of the lowlands/valleys where thermal inversion was holding temperatures lower – many stations reported 18-22 °C. Severe Weather Europe


On the other hand, its a story of storm-battered Europe with storm after storm with hurricane-force winds and heavy rains have been delivered by an increasingly erratic jet stream. Last weekend Storm Ciara brought 6 weeks of rain in 24 hours in the UK and 15-meter / 50-feet waves across Ireland and the UK. Network Rail said thousands of engineers had "battled horrendous conditions" after the storm blew trees, sheds, roofs and even trampolines onto the railway tracks. The Mediterranean island of Corsica saw winds as high as 200 kph (124 mph) and up to 500,000 were without power throughout Europe.