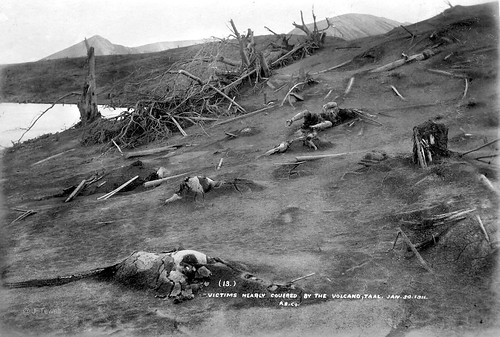 The 1911 eruption, 1500 died and injured 199, although it is known that more perished than the official records show. The seven barangays that existed on the island previous to the eruption were completely wiped out. Post mortem examination of the victims seemed to show that practically all had died of scalding by hot steam or hot mud, or both. The devastating effects of the blast reached the west shore of the lake, where a number of villages were also destroyed. Cattle to the number of 702 were killed and 543 nipa houses destroyed. all other life agriculture included was destroyed, apart from one rooster, credit Wikipedia

On January the 30th, 1911 the Taal Volcano erupted killing 1,500 people, everything on the island was destroyed except for a rooster. Now, 109 years later almost exactly to the date, the Taal Volcano is erupting again. Could the eruptions be linked to lack of sunspot activity on our Sun? In 1911, our Sun had one of its lowest amounts of sunspot day's this century recording 200 spotless days, 213 recorded the most spotless days this century with 310, now, let us shoot forward to 2019 and we had 281 spotless days, the 2nd most this century, see graph below. 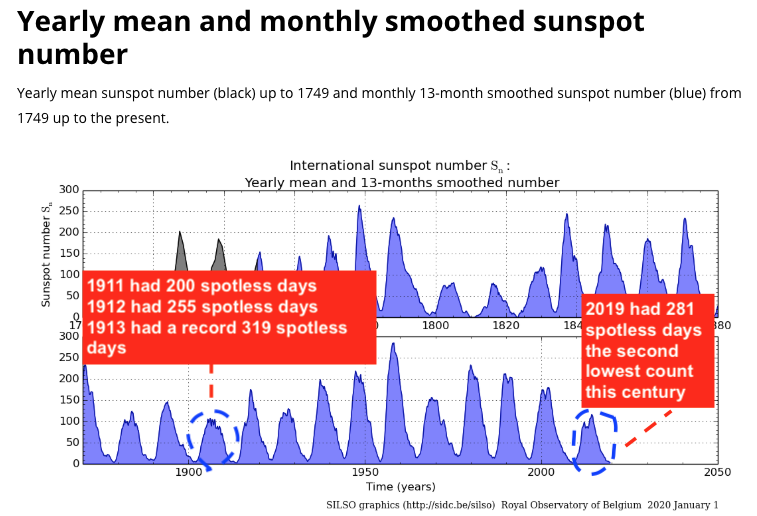 For the past 24 hours, Taal Volcano’s activity has been characterized by the continuous but generally weaker eruption of the Main Crater due to magmatic and hydrovolcanic processes. This ongoing eruption generated dark grey steam-laden plumes that reached approximately 1000 meters high and dispersed ash to the southwest of the Main Crater. New fissures or cracks were observed AROUND THE CRATER.

Alert Level 4 still remains in effect over Taal Volcano. This means that hazardous explosive eruption is possible within hours to days. DOST-PHIVOLCS strongly reiterates total evacuation of Taal Volcano Island and high-risk areas as identified in the hazard maps within the 14-km radius from Taal Main Crater and along the Pansipit River Valley where fissuring has been observed. Residents around Taal Volcano are advised to guard against the effects of heavy and prolonged ashfall.

More than 500,000 have been told to leave the area, another 30,000 were evacuated after Sunday's eruption: Experts are worried a much larger eruption is just around the corner.


One of the more devastating eruptions of Taal occurred in January 1911. During the night of the 27th of that month, the seismographs at the Manila Observatory commenced registering frequent disturbances, which were at first of insignificant importance but increased rapidly in frequency and intensity. The total recorded shocks on that day numbered 26. During the 28th there were recorded 217 distinct shocks, of which 135 were microseismic, while 10 were quite severe.

The frequent and increasingly strong earthquakes caused much alarm at Manila, but the observatory staff was soon able to locate their epicentre in the region of Taal Volcano and assured the public that Manila was in no danger.

In Manila, in the early hours of 30 January 1911, people were awakened by what they at first perceived as loud thunder. The illusion was heightened when great lightning streaks were seen to illuminate the southern skies. Those who investigated further, however, soon learned the truth. A huge, fan-shaped cloud of what looked like black smoke ascended to great heights. It was crisscrossed with a brilliant electrical display, which the people of Manila perceived as lightning.

On Volcano Island, the destruction was complete. It seems that when the black, fan-shaped cloud spread, it created a blast downward that forced hot steam and gases down the slopes of the crater, accompanied by a shower of hot mud and sand. Many trees had the bark shredded and cut away from the surface by the hot sand and mud blast that accompanied the explosion, and contributed so much to the loss of life and destruction of property. The fact that practically all the vegetation was bent downward, away from the crater, proved that there must have been a very strong blast down the outside slopes of the cone. Very little vegetation was actually burned or even scorched. Six hours after the explosion, dust from the crater was noticeable in Manila as it settled on furniture and other polished surfaces.

The eruption claimed a reported 1,335 lives and injured 199, although it is known that more perished than the official records show. The seven barangays that existed on the island previous to the eruption were completely wiped out. Post mortem examination of the victims seemed to show that practically all had died of scalding by hot steam or hot mud, or both. The devastating effects of the blast reached the west shore of the lake, where a number of villages were also destroyed. Cattle to the number of 702 were killed and 543 nipa houses destroyed.

Main Crater with Vulcan Point Island in 2009 Observations on the Volcano Island after the eruption Volcano Island sank from three to ten feet as a result of the eruption. It was also found that the southern shore of Lake Taal sank in elevation from the eruption. No evidence of lava could be discovered anywhere, nor have geologists been able to trace any visible records of a lava flow having occurred at any time on the volcano back then. Another peculiarity of the geologic aspects of Taal is the fact that no sulphur has been found on the volcano. The yellow deposits and encrustations noticeable in the crater and its vicinity are iron salts, according to chemical analysis. A slight smell of sulfur was perceptible at the volcano, which came from the gases that escape from the crater.

We are entering a quiet phase of our star which affects our magnetic poles. Therefore once again we will experience a pole shift and witness extreme changes to our earth...Yes it will affect everything.