Temperatures above 40 deg C, (104 deg F) and strong winds are causing the worst bushfire in 20 years south of Australia's capital Canberra: Authorities have declared a state of emergency 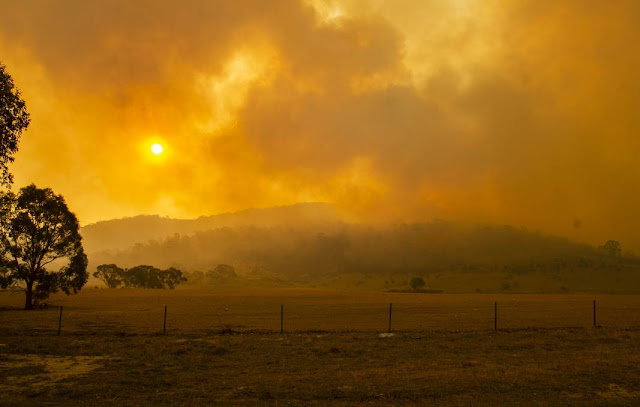 We began January 2020 with an Australian wildfire crisis and we are going to end the month with another one. Authorities of the Australian Capital Territory, (ATC) have declared a state of emergency as the worst bushfire in 20 years is devastating areas south of the nation's capital Canberra.

The main blaze, in the territory's south, is burning over more than 18,500 hectares. Residents in suburbs of Canberra have been urged to "remain alert" for potential evacuations. "The ACT is now facing the worst bushfire threat since the devastating fires of 2003," Chief Minister Andrew Barr told reporters on Friday. "There's now no higher priority for the ACT government at this time than the bushfire threat." Mr Barr warned the fires "may become uncontrollable" as temperatures climbed to 40C and were fuelled by strong winds. He said the worst blaze was just south of the district of Tuggeranong, a 20-minute drive south of Parliament House in Canberra. BBC


Elevated fire conditions in the ACT set to accumulate on Saturday afternoon...

The warm and windy conditions forecast for the ACT and NSW surrounds on Saturday are set to accumulate in the afternoon. The Bureau of Meteorology has issued a severe fire weather warning for the ACT on Saturday. Strong wind gusts of up to 45km/h are set to hit elevated areas on the fireground and winds are set to pick up across the ACT late morning, BOM meteorologist Gabrielle Woodhouse said. But winds on the fireground were forecast to persist overnight on Friday. "In Canberra city itself we will see winds increasing from about 10 or 11am in the morning," Ms Woodhouse said. "But through the higher parts, it may remain a bit windy overnight and become windier slightly earlier than Canberra city itself." Northwesterly winds in the afternoon, along with hot temperatures will be when the fire danger is at its highest. Canberra Times