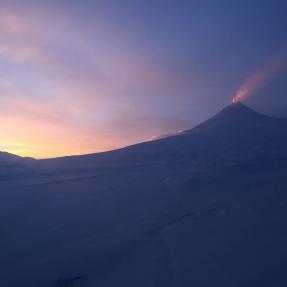 An Alaska volcano shot an ash cloud about 5 miles (8 km) into the sky on Tuesday, prompting flight delays and cancellations and raining volcanic particles onto at least one nearby community, officials said. It is the volcanoes second eruption this week. Last Friday Alaska's colossus shot a cloud of ash more than 5 miles high. Shishaldin Volcano is one of Alaska’s most active volcanoes, a towering ice-covered cone in the Aleutian Islands.

The ash-producing explosion at Shishaldin Volcano, about 680 miles (1,094 km) southwest of Anchorage, marked the biggest event in about six months of the on-and-off eruption activity at the mountain, the Alaska Volcano Observatory reported. Shishaldin, one of Alaska’s most active volcanoes and the highest peak in the Aleutian Islands chain, began emitting ash Tuesday morning and was continuing to do so through early afternoon, observatory geologist Kristi Wallace said. The cone-shaped mountain, largely covered with snow and ice year-round, stands 9,373 feet (2,857 meters) tall on Unimak Island. Reuters

Alaska's colossus shot a cloud of ash more than 5 miles high last Friday. Shishaldin Volcano is one of Alaska’s most active volcanoes, a towering ice-covered cone in the Aleutian Islands. On Friday, the 3rd of Jan, 2020 shot a cloud of ash more than 5 miles high triggering a warning to aviators and putting on a show that was captured in satellite imagery. The ash burst from Shishaldin Volcano, about 670 miles southwest of Anchorage, was part of an on-and-off, mostly low-level series of eruptions that began in July with a stream of lava from the crater at the peak of the 9,373-foot-tall mountain. The ash plume was spotted by a pilot and was visible in satellite images captured from space. It drifted over the sea at least 75 miles southeast of the volcano, the Alaska Volcano Observatory reported. Full story