More than a months rain falls in 24 hours: Torrential rain breaks records in North Queensland: A new fire rages out of control near Canberra with a new heatwave on the way 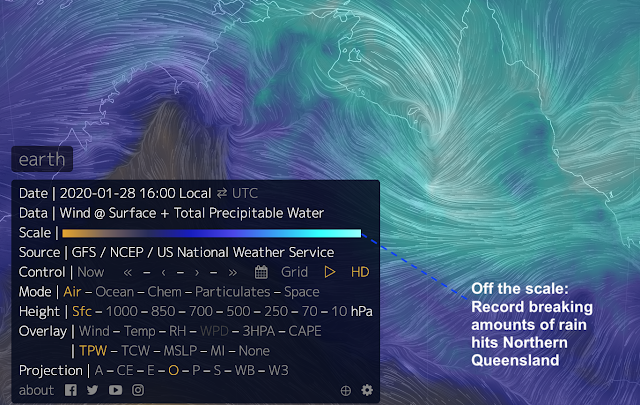 North Queensland communities are bracing for more torrential rain, while the state’s southwest is baking in another summer heatwave. Water inundated backyards and lapped at doorsteps in Ayr, just south of Townsville after an extraordinary deluge dumped 458mm of rain in just 24 hours on Monday. Further rain in the region on Tuesday quickly caused floodwaters to cut the Bruce Highway between Ayr and Home Hill, on the southern side of the Burdekin River. Roads in Ayr itself are also closed with only emergency vehicles allowed through. Rita Island, just south of Ayr, had even more rain, with more than 615mm falling since Monday morning, and 529mm in 24 hours to 9am Monday.
The deluge broke records in the Burdekin, with the previous highest totals being 395mm in Home Hill back in March 1988, 254mm in Ayr DPI station also recorded in March 1988 and 478mm in February 1947 at Burdekin Shire Council weather station. News.com.aus

Meanwhile, Australian fires are back: Blaze 'sparked by helicopter lights' rages near Canberra An army helicopter's landing lights are thought to have sparked a bushfire burning south of Canberra.