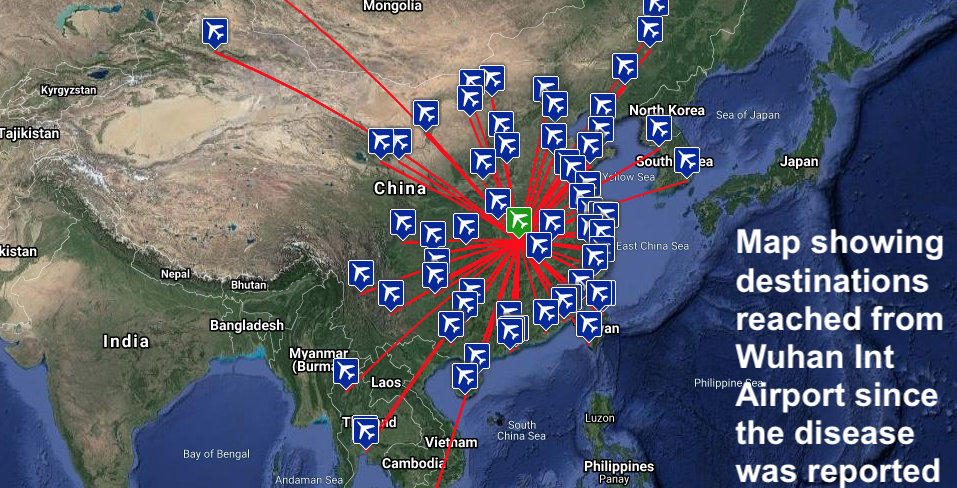 You can't put the toothpaste back in the tube! Map RSOE
Chinese authorities have reported 139 new cases of a mysterious virus in two days, marking the first time that the infection has been confirmed in the country outside of Wuhan city. The new cases were identified in the cities of Wuhan, Beijing and Shenzhen. The total number of confirmed cases now exceeds 200, and three have died from respiratory illness. The World Health Organization (WHO) said the number of cases rose because of "increased searching and testing". The new coronavirus strain first appeared in Wuhan in December and has already spread abroad, with two cases in Thailand and one in Japan. BBC

The actual number of cases now probably in the thousands
The number of people already infected by the mystery virus emerging in China is far greater than official figures suggest, scientists have told the BBC. There have been 45 laboratory-confirmed cases of the new virus, but UK experts estimate the figure is closer to 1,700. Two people are known to have died from the virus, which appeared in Wuhan city in December. "I am substantially more concerned than I was a week ago," disease outbreak scientist, Prof Neil Ferguson, said. The work was conducted by the MRC Centre for Global Infectious Disease Analysis at Imperial College London, which advises bodies including the UK government and the World Health Organization.
Below is the summary from the disease outbreak scientist, Prof Neil Ferguson. Full Story

The impact of air travel on the spread of infectious diseases has led to considerable concern but limited study. More than 1 billion people travel by air each year. There are several important ways in which air travel can influence the global spread of emerging and established infectious disease. Infections may be spread on the aircraft through close contact and large droplets; airborne spread through small-particle aerosols, as in the case of the severe acute respiratory syndrome (SARS); or even through contaminated food. Aircraft can transport infected disease vectors, such as rats or malaria-infected mosquitoes, as nonpaying passengers. Perhaps the greatest concern for global health, however, is the ability of a person with a contagious illness to travel to virtually any part of the world within 24 h. RSOE

Thanks to my immunity, I can cure any contagious infection. I can provide my article in Russian riszhat@yandex.ru