Global Uprising! US says Iran may have killed 1,000 protesters in a government crackdown: Crippling strikes begin in France: Iranians Have Broken Barrier of Fear 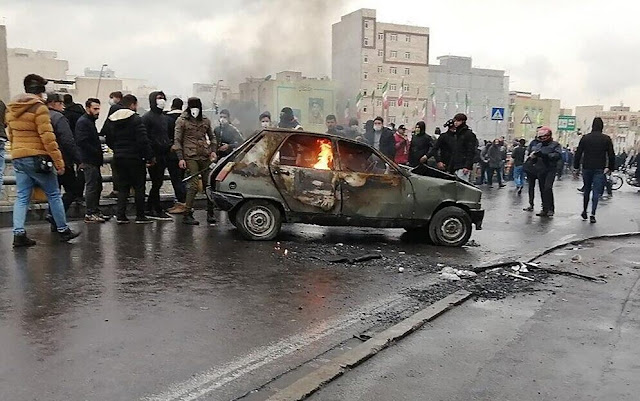 Iranian protesters gather around a burning car during a demonstration against an increase of gasoline prices, in the capital Tehran, November 16, 2019. (AFP)

Are the recent escalation of riots and protests against corrupt and week governments around the world this year, a precursor to a global version of the Arab Spring, which caused governments to fall, causing millions of deaths from three deadly civil wars and sending even more millions of refugees into Europe? Below is an update to pressure points around the world.
The US says Iran may have killed over 1,000 protesters in a government crackdown. The charge comes as the Pentagon is said to be mulling sending up to 7,000 troops to the region; Washington is calling the Iranian demonstrations, the ‘worst political crisis’ ever faced by the regime.

The US said Thursday that Iranian security forces may have killed over 1,000 people in a recent crackdown on demonstrations, which Washington cast as the regime’s worst-ever internal challenge. The damning account came as the US put new pressure in the region on the Islamic Republic, with an official saying the Pentagon was considering sending 5,000 to 7,000 more troops. “It appears the regime could have murdered over 1,000 Iranian citizens since the protests began,” said Brian Hook, the US Special Representative on Iran. The Times Of Israel


Iranians Have Broken Barrier of Fear with their Protests. The Iranian protests’ most important achievement is that it let the regime know that the barrier of fear has been broken. These sporadic protests first started in Iraq, spread to Lebanon and led to the prime ministers in both countries resigning. It then reached the streets of Tehran with vigour. AAA

Colombia shows how protests in one country are fortifying demonstrators in another—first by highlighting grievances, then by inspiring people to take action. For the third time in two weeks, Colombians turned out Wednesday for a national strike, demanding the government of President Ivan Duque accept a wide-ranging list of popular demands. With hundreds of thousands of people taking to the streets in protest, Duque faces a political challenge that is magnified by the wider context in which it is unfolding: a proliferation of demonstrations across the region and the world, as far away as the Middle East and Hong Kong, some of which have already succeeded in toppling governments, including one in South America. WPR

PARIS — Crippling strikes began in France on Thursday in response to President Emmanuel Macron’s plans to overhaul the retirement system. Transport unions led the protests and were joined by air traffic controllers, teachers and health workers. As a result, 90 per cent of high-speed TGV trains did not run. The Eurostar train service — connecting Paris, London, Brussels and Amsterdam — announced significant cancellations. Air France and British budget airline EasyJet said they were cutting flights. Meanwhile, many schools were closed, and hospitals were left understaffed. In Paris, many daily activities ground to a halt. Eleven of 16 Metro lines were shut down, leaving stations eerily vacant. The capital’s most notable landmark, the Eiffel Tower, was closed. Thursday’s demonstrations saw a turnout of 800,000 demonstrators across France, according to the official government count. Organizers contested the official numbers, saying they counted 250,000 protesters in Paris alone, whereas the government calculated 65,000 in the capital. Either way, the action was far bigger than any of the “yellow vest” protests of the past year, which peaked at 282,000 nationally. Washington Post

Lebanese protesters vow to step up demonstrations as a decision on new prime minister looms. Caretaker premier, Saad Hariri, who quit in October amid protests over political corruption and economic hardships, has said he will not take part in the new government but is backing businessman Samir Khatib to replace him. However, many protesters in the Lebanese civil movement, which on Thursday marked 50 days of demonstrations, are unhappy with Hariri’s choice for PM and have pledged to escalate their action throughout Lebanon. One activist, Dr Ziad Abdel Samad, told Arab News: “Protesters are absolutely against the naming of Samir Khatib as the future PM. Arab News

Baghdad (AFP) - Crowds backing a paramilitary force close to Iran streamed into the Iraqi capital's main protest camp on Thursday, rattling anti-government demonstrators who have denounced Tehran's role in their country. The flash protest hinted at a new effort to delegitimise or intimidate anti-government protesters, and came after the apparent torture and death of a 19-year-old girl taking part in the rallies. Youth-dominated mass rallies have rocked Iraq's capital and Shiite-majority south since October, slamming the entrenched political class as corrupt, incompetent and under the sway of neighbouring Iran. Tehran holds vast influence among Iraq's ruling figures and military actors, chiefly the armed, Shiite-majority Hashed al-Shaabi network. On Thursday, several thousand Hashed supporters marched into Baghdad's Tahrir Square, the epicentre of anti-government protests.

Hong Kong police fired tear gas at anti-government protesters as demonstrations enter the tenth week – while thousands continue two-day sit-in at the airport. Police in Hong Kong fired tear gas at pro-democracy protesters today as they defied warnings to cancel a march, while thousands continued a two-day sit-in at the airport. The fresh demonstrations came after the city‘s leader pledged she would not grant concessions to the protesters as their movement enters its third month. Tear gas was fired at a crowd of some 1,000 people in a brief evening standoff at a commuter rail station in Tai Wai in the northern region of New Territories. In a separate incident, tear gas was fired at protesters who surrounded a police station in the Tsim Sha Tsui district on the northern side of Hong Kong‘s harbour, opposite Hong Kong Island. Riot police arrive at a gathering of protesters in Hong Kong on Saturday after protesters defied warnings to cancel their march Protesters wearing helmets and black t-shirts throw back tear gas canisters fired by the police in Tai Wai in the New Territories of Hong Kong Stock Daily Dish

Haitians say they won’t stop protesting. As anti-government demonstrations make headlines around the globe, dissidents in Haiti have been staging protests for over a year, in an effort to end the systematic corruption in the country. PBS 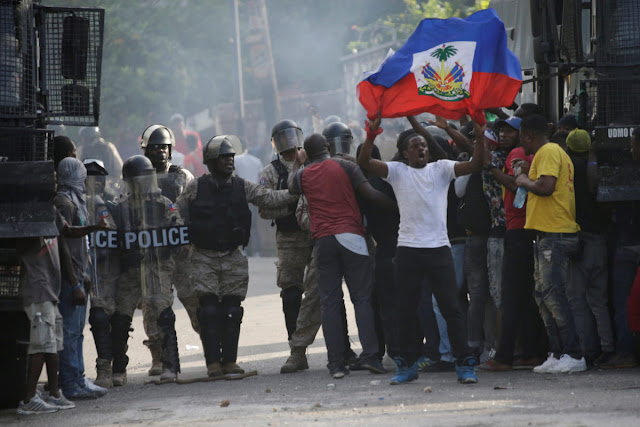 In Haiti, we can fight corruption as well. And it’s about time they stop and listen to us