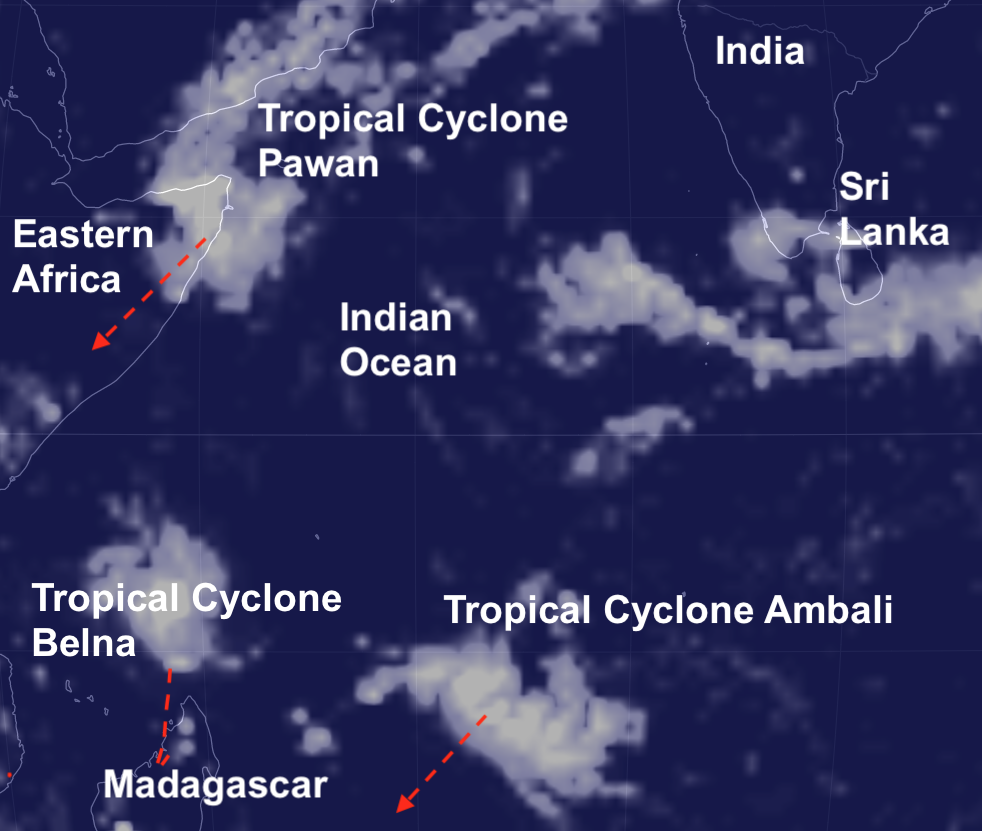 The impressive and rare tropical activity which is currently ongoing in the Indian Ocean has intensified with three of the five tropical systems seen yesterday developing into hurricanes,
or tropical cyclones, as they are called in that part of the world.


The strongest of the three, Ambali is rapidly intensifying by 115 mph wind-speeds in 24 hours, making it the most rapid intensification in a 24-hour period in the Southern Hemisphere by a named storm on record and the second most rapid intensification globally. Ambali is at this moment, the equivalent of a strong Category 4 hurricane and is south of the Equator and east of northern Madagascar. Ambali is not expected to threaten land before dissipating.

Tropical Cyclone Belna is intensifying well south of the Equator, off the northern coast of Madagascar and could become a heavy rain and wind threat to the Comoros and Madagascar early next week.

Tropical Cyclone Pawan (known locally as Cyclonic Storm Pawan), is north of the Equator and is a weak system that will bring increased moisture and may bring heavy rain and flooding to an already saturated Somalia this weekend which has been devastated by deadly flooding since October. In Somalia, over half a million people have now been affected by the ongoing floods since October. With homes destroyed and crops devastated, flood-hit communities are in desperate need of assistance, says the UN. Heavy rains in Somalia and the Ethiopian highlands caused the Shabelle and Juba Rivers to overflow. Flooding has now affected over half a million people in Somalia alone, of whom 370,000 are displaced from their homes, according to the United Nations Office for the Coordination of Humanitarian Affairs (OCHA). Flooding began around 21 October and has destroyed farmland and infrastructure and devastated livelihoods in some of the worst-hit areas. At least 17 people have died, roads and homes destroyed, and about 10,000 hectares of crops flooded. 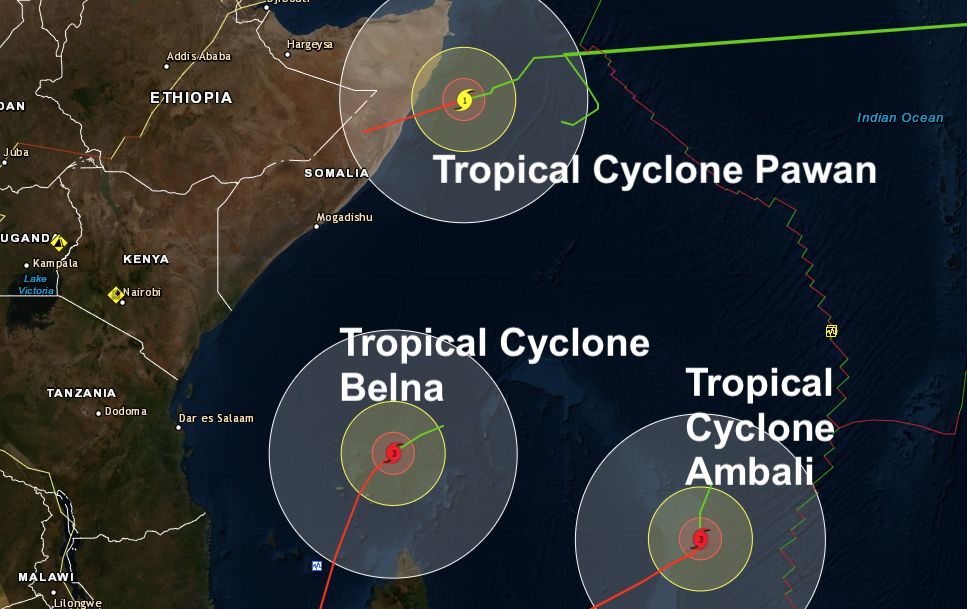 The devasting floods and this weeks tropical disturbances have been caused by a weather system known as a "positive Indian Ocean Dipole. This happens when waters on the eastern side of the Indian Ocean are cooler than usual, while the warmers in the western side are warmer than usual. The warm waters have enhanced the seasonal downpours in places like Somalia and Kenya, where recent rains in Kenya have affected more than 160,000 people since the onset of the rains in October, according to the Kenya Red Cross Society (KRCS). At least 120 people have reportedly died, including dozens who lost their lives after a landslide in West Pokot County on 23 November. KRCS said that nearly 18,000 who are displaced countrywide, including 10,000 in West Pokot County. According to the Kenyan government, 16,000 houses have been destroyed across the country.

Two tropical storms are expected to hit East Africa late on Thursday and Friday, in areas which have already been affected by heavy rain. A weather phenomenon on the Indian Ocean has led to downpours across the region with rivers swollen and some areas experiencing floods and others landslides. The extreme weather has affected millions of people in Kenya, Rwanda, Somalia, Burundi, Tanzania, South Sudan, Uganda, Djibouti and Ethiopia. Authorities have advised coastal residents to avoid low lying areas.