Earth's weather is an incongruity this Christmas: Record warmth for Moscow and the UK: Delhi second-coldest Dec in 100 years: Antarctic ice-melt at an all-time high 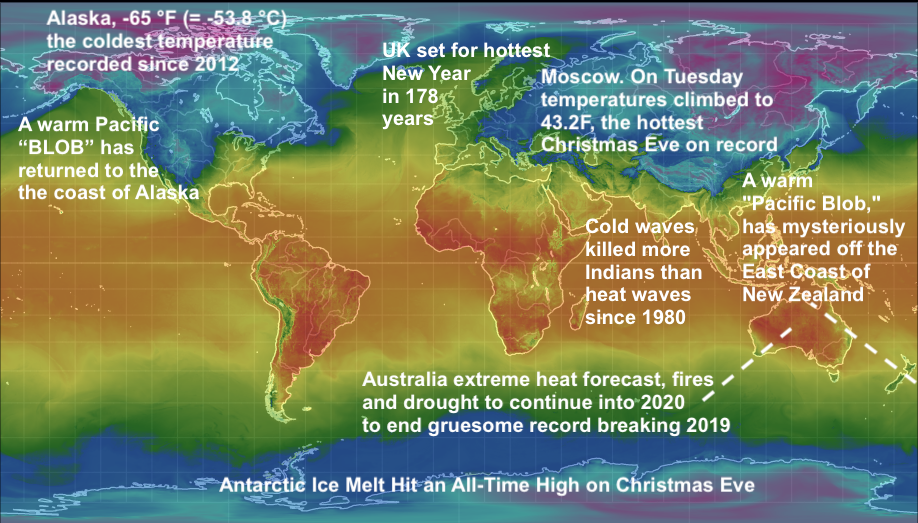 Delhi faces second-coldest December for over a CENTURY: India gripped by ‘bone-chilling’ weather

A wave of unusually cold weather is sweeping across large swathes of India, from remote Kashmir to Delhi, forcing people to seek shelter and light bonfires on the streets. Delhi has been hit with what local media described as ‘bone-chilling days’ this week. In the early hours of Friday, the temperature dropped to almost four degrees Celsius (39.2 degrees Fahrenheit). This December is now on course to become the second coldest in terms of daytime temperatures the capital has seen since 1901, with December 1997 holding the top spot. RT

The UK is set for its warmest New Year’s Eve in 178 years as a vast tropical plume is expected to bring temperatures to balmy heights.

The Met Office has forecast that temperatures could reach highs of around 16 deg C, (61 deg F) up to and including New Year’s Eve on Tuesday, a steady increase from the 7 to 9C average at this time of year in England and Wales. In fact, it will be the UK’s warmest December 31 since the temperatures were recorded in 1841 where the record was set at 15.6 deg C, (60 deg F) in Great Yarmouth way back in 1910. Europe Weekly News

More misery for the Aussies

Penrith in western Sydney will rise to 41 deg C, (106 deg F) today as fresh heatwave kicks in, while regional centres in the Hunter, central west, central and southern tablelands will feel the heat with temperatures well above 35C, (95 deg F). Temperatures are expected to peak on Tuesday, with New Year's Eve forecasts of more than 40C across western Sydney and in regional NSW. "Tomorrow we are expecting peak temperatures to be at South Australia, Victoria and Tasmania," BOM Meteorologist Sarah Scully told Today. "We are expecting temperatures in Tasmania to be about 40C – even hotter for Melbourne at 43C," (110 deg F). 9News

Russians bracing for the typical winter chill have been left baffled by unusually warm weather which scuppered the country's hopes of a white Christmas. At this time of year, Moscow is usually blanketed in snow, but it is not expected until the turn of the year after temperatures on Tuesday climbed to 43.2F, the hottest Christmas Eve on record. Daily Mail

A *frigid* cold is verifying across parts of Alaska now. This morning, a low temperature of -65 °F (= -53.8 °C) has been observed 15 miles northeast of the town Manley Hot Springs! This is the coldest official temperature recorded in Alaska since January 2012 when -66 °F (-54.5 °C) has been recorded in Ft. Yukon! The town of Manley Hot Springs is located around 85 miles west of Fairbanks and around 260 miles north of the capital Anchorage. The location of this extremely low temperatures is in the lowest part of the valley where the cold pool is usually the strongest. Severe Weather Europe

There are signs Antarctica just experienced its highest melt extent ever recorded in the satellite era. The big meltdown hit on Christmas Eve and is bad news for a continent already dealing with a lot. With summer is just getting started there, this is a serious case of Summertime Sadness. Gizmodo


A "Pacific Blob," has mysteriously appeared off the East Coast of New Zealand a reflection of another more famous, "Pacific Blob," off the Alaskan coast which has destroyed the ecosystem

A new "Pacific Blob," has mysteriously appeared off the East Coast of New Zealand and is a reflection of another more famous, "Pacific Blob," which lies off the coast of Alaska and is thought to be the reason of lack of fish resulting in the deaths of millions of seabirds from starvation in the vast area since 2015. The Big Wobble 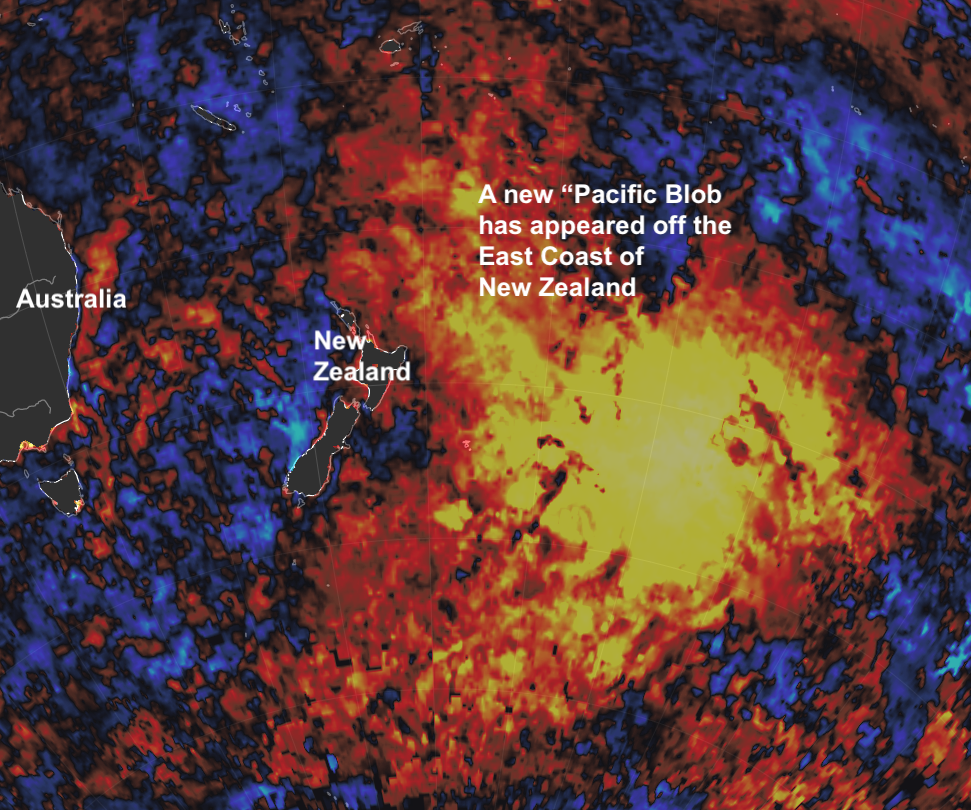 The new mysterious "Southern Blob," is an enormous area, according to NZHerald. In fact, the blob is a very big patch of water measuring tens of thousands of square kilometres where the water is 4C above the average temperature of 10C to 15C on a similar latitude to Wellington in the Pacific Ocean. The central hot spot is about the size of the North Island(114,000sq km) or the South Island(150,000sq km). The wider area is larger than both islands combined.