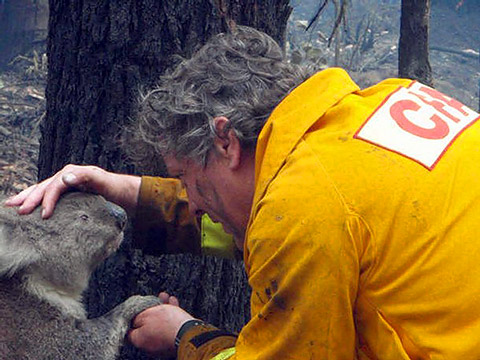 Around 480 million animals are feared to have died in the bushfires sweeping Australia, including nearly a third of the koalas in New South Wales's main habitat. Ecologists at the University of Sydney estimate around 480 million mammals, birds and reptiles have been killed, directly or indirectly, by the devastating blazes since they began in September. This includes almost 8,000 koalas, which are believed to have burnt to death on the state’s mid-north coast. The region, which lies around 240 miles north of Sydney, is home to the largest number of Australia’s koalas, with a population of up to 28,000. Federal environment minister Sussan Ley told ABC "up to 30 per cent of the population in that region" may have been killed, because around 30 per cent of their habitat has been destroyed. Evening Standard

Beekeepers who were traumatised are being counselled after hearing animals screaming in pain after bushfires. NSW Apiarists Association president Stephen Targett said the situation in north-eastern NSW was "truly devastating" to beekeepers and extremely traumatic. The screaming animals, the animals that are in pain, that are crying out in the forest, it's absolutely horrific," Mr Targett said. "One beekeeper employs some young people and it has really traumatised them. Counselling has been arranged for these young beekeepers who went into the forest and they won't allow them back into the forest for a period of time, reports The Big Wobble

A new heatwave is forecast to be “extreme.”

Just a week after enduring its hottest December heat waves on record, much of Australia is bracing for another round of punishing, dry heat and bush fire dangers through the weekend and into next week. The new heatwave is forecast to be “extreme,” the most severe designation on the Australian Bureau of Meteorology’s forecast scale. Such heatwaves pose a health “risk for anyone who does not take precautions to keep cool, even those who are healthy,” the BOM states on its website. The hottest areas will be in inland South Australia on Saturday, while southeastern Australia, which has been severely affected by deadly bush fires that have burned an area nearly twice the size of Connecticut, is forecast to heat up by Sunday into Monday. Washington Post

"Over the weekend the heat will build over Victoria and New South Wales, gradually reaching all the way to the Sydney area by Monday," he said. "Temperatures and the fire threat will increase as we head through the weekend, with the worst conditions expected for the fire-plagued areas of eastern New South Wales on Monday and Tuesday." Melbourne, capital of Victoria state, could hit 41 Celsius (105.8 Fahrenheit), on Monday, the BOM said on its website.