Trump once again blames wildfires on California's Governor Gavin Newsom but is the real culprit a small beetle which is decimating trees around the world? 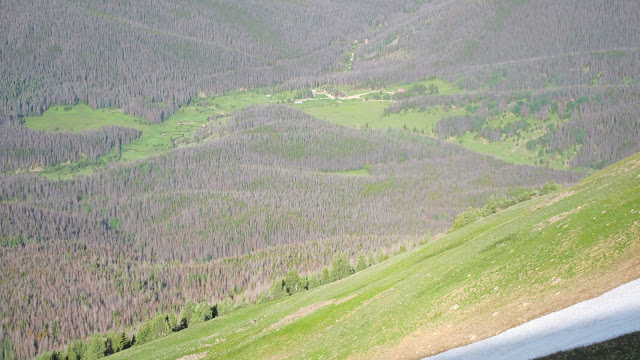 As firefighters finally gain an edge on the Californian wildfires, US President Donald Trump has blamed California's Governor Gavin Newsom, a Democrat, for the fires, saying he had done a "terrible job of forest management" and has threatened to cut federal funding for the wildfires sweeping California.

Almost 100,000 acres have been destroyed by wildfires since the Kincade Fire started in Sonoma County on October the 23rd this year with thousands of residents forced from their homes, however, several of this year's major wildfires have burned in unforested areas.

"Every year, as the fire's (sic) rage & California burns, it is the same thing - and then he comes to the Federal Government for $$$ help. No more. Get your act together Governor," Mr Trump wrote on Twitter.
Mr Newsom, who has been highly critical of Mr Trump's environmental policies, responded: "You don't believe in climate change. You are excused from this conversation." Last year, President Trump threatened to cut federal aid after the most deadly fire in California's history killed 86 people.

Drier, warmer conditions are leading to vegetation drying out and becoming more flammable, throw into the equation of nearly 300 million dead trees and it's not hard to see why California has become a major fire threat.

Pine Beetles are fuelling the deaths. California's trees are dying at a rate of 30 million every year due to drought and bark beetles.
With so many dead and dying trees it would cost the state billions to cut them down, so they are just left where they stand, a great big fat accident just waiting to happen. Full story  Add to the above a phenomenon called the Diablo winds reaching speeds of 80 miles an hour, the fires themselves are travelling at 6 miles an hour through forestry and more than twice that through the grassland. California's four most extreme fires have now occurred in the last three years.

The problem is even worse in Colorado, one in every 14 standing trees in is dead, according to a report on the health of the state's wooded areas.
The study, released by Colorado State Forest Service out of Colorado State University, calculated an estimated one billion dead trees, many of them succumbing to two beetle epidemics. That's a tree casualty increase of 30 per cent in the last nine years.
An estimated 300 million trees are dead in California and Pine Beetles are fuelling the deaths.
And now, Reuters, are claiming the problem is causing chaos in Europe too.
Hot, dry summers are fanning an unprecedented outbreak of bark beetles that are destroying vast swathes of central Europe’s spruce forests which define the region’s landscape.
The drought brought on by climate change has weakened trees’ natural defences and helped spawn the insects, creating an infestation that has forced landowners to chop down broad patches of forest across the Czech Republic, northern Austria, Bavaria and Slovakia.
While the bark beetle is natural to conifer forests and has a role in their ecosystem, climate change has helped it spread especially through single-variety spruce woods planted over the past two centuries.
The Czech Republic has been the worst hit.
Last year, the beetle, infested 18 million cubic meters of spruce, more than 10 times amounts seen in most previous years, according to Agriculture Ministry estimates.
This year, forecasts range from 20 to 30 million cubic meters, out of 480 million cubic meters of spruce timber in total, as the situation is expected to deteriorate across the region, especially given a lack of rainfall so far this spring.
“Eighty per cent of Czech spruce forests are at high risk of dying,” said Jaromir Blaha, forest expert at Hnuti Duha, an environmental NGO.
“Most of our spruce monocultures in lower and mid-laying areas will probably disappear, in years or in a few decades.”
Think tank Czech Forest says the area destroyed last year alone was equal to 100,000 soccer fields.
Bark beetles grow to about half a centimetre in length.
They mate under the bark and lay eggs.
Larvae make feeding tunnels in the trees, mostly killing them.
Young adults fly out and, when the weather allows, repeat the process once or twice per season. Upper Austria’s minister for agriculture, Max Hiegelsberger, in a report on forestry in 2018, said the situation was “dramatic” as more than half the felled timber in his region was damaged, and forest owners were seeing a huge drop in income.