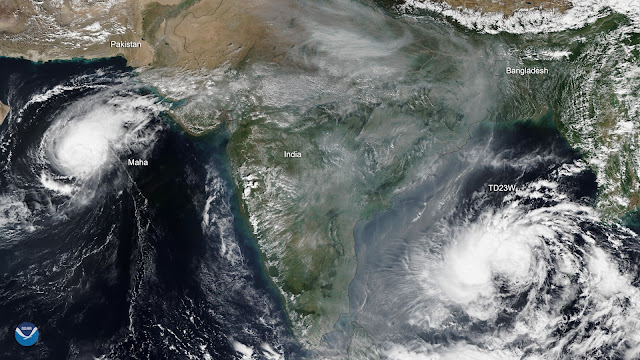 As NOAA-20 passed over India on Nov. 5, 2019, the satellite captured this dynamic image of two storm systems as well as the thick blanket of smog that still lingers over the country.


New Delhi, India's capital city, with a population of 26 million has been called a gas chamber this week. A thick haze has hung over many parts of India caused by plumes of toxic smoke from farm fires raging in neighbouring states. According to the Central Pollution Control Board, an index measuring the level of a deadly air pollutant hit 484 on a scale of 500 this week, the government’s worst this year. It is thought deadly air pollutants are killing nearly 2 million Indian's every year with the number increasing, however, an unlikely ally has arrived to clean up the mess in the way of 2 large tropical cyclones, see map below. 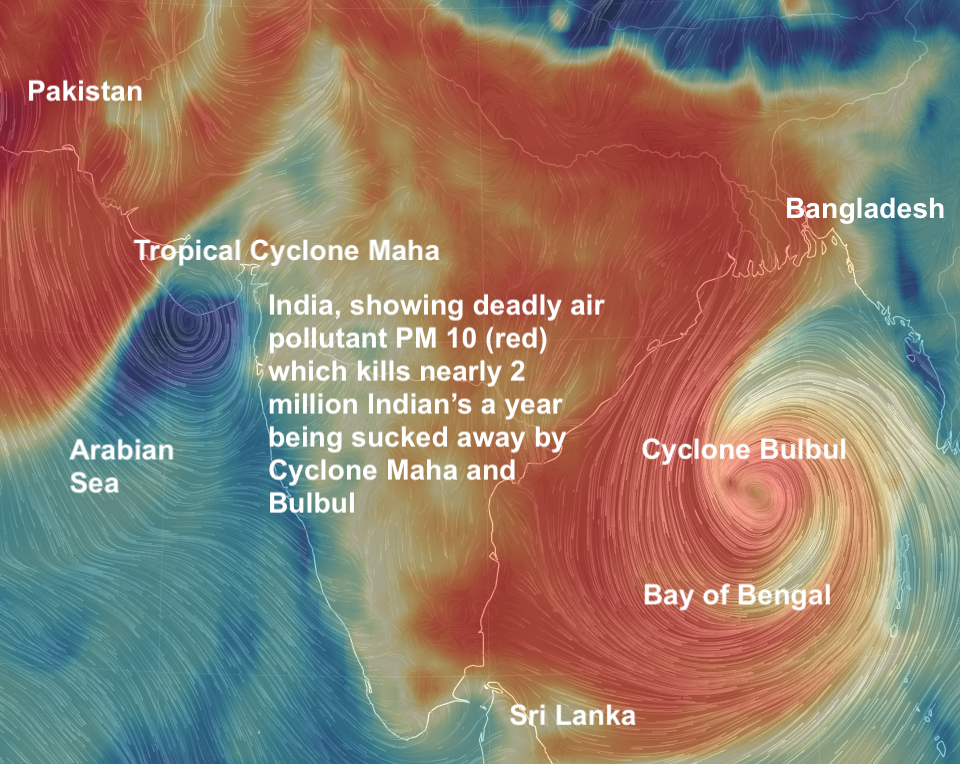 Earthwindmap
Tropical Cyclone Maha is continuing to spin over the Arabian Sea, though it is steadily losing intensity and is now considered a “severe cyclonic storm.” At its peak, it was the equivalent of a Category 3 hurricane on the Saffir-Simpson Hurricane Wind Scale. The storm developed off the southwestern coast of the country during the middle of last week, following a path similar to former Super Cyclone Kyarr toward the Arabian Peninsula. However, it has now started to turn back toward India in a new northeasterly track toward Gujarat. Meteorologists will be watching the storm carefully to get a better picture over the next 48 hours. It is currently expected to make landfall north of Mumbai near Diu, bringing heavy rains and strong winds.
To the west over the Bay of Bengal, a very deep tropical depression is brewing that is expected to intensify into Cyclone Bulbul, according to the Indian Meteorological Department (IMD). The storm was expected to hit coastal regions of the state of Odisha by this weekend, but as of this morning, the IMD said it may instead head toward Sagar Island in West Bengal and Kepupara in Bangladesh. Despite this, fifteen districts in Odisha have been put on alert.
As the storm grows in strength, it is beginning to draw in some of the thick clouds of smog that are looming over the country.
This image was captured by the NOAA-20 satellite's VIIRS instrument, which scans the entire Earth twice per day at a 750-meter resolution. Multiple visible and infrared channels allow it to detect atmospheric aerosols, such as dust, smoke and haze associated with industrial pollution.