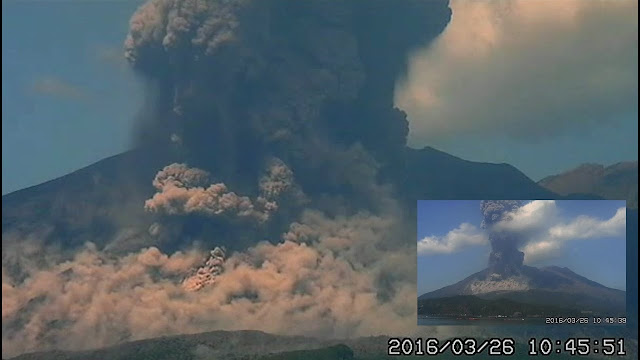 Image dutchsinse. Smoke was seen rising from the Sakurajima Volcano in Japan

Smoke was seen rising from the Sakurajima Volcano in Kagoshima, Japan, on November 28, with the area impacted by a number of days of volcanic activity. In total, “nine eruptions and eight explosions were detected between November 25 and 29 November 2019,” according to VolcanoDiscovery.com. The same report, which cites the Japanese Meteorological Agency, stated that the plume of smoke from the volcano reached 14,400-feet in altitude, resulting in a large amount of sulfur dioxide being released. The Japanese Meteorological Agency forecasted ashfall in the area on the same date. The dramatic scene comes three weeks after the largest explosion at the volcano in three years. Yahoo

Explosive activity continues at the Klyuchevskoy Volcano in Russia. Volcanic Ash Advisory Center (VAAC) Tokyo warned about a volcanic ash plume that rose up to estimated 18000 ft (5500 m) altitude or flight level 180 and is moving at 15 kts in SE direction. Volcano Discovery

Guatemala’s most dangerous colossus the Fire, or Fuego volcano has been showing violent and eruptive behaviour since November the 19th. The latest eruption has spewed ash and gas emissions  This activity originates ash columns that reached approximate heights of 4,800 meters above sea level (15,748 feet) and travelled 20 km west and southwest. Full story

A spectacular explosion was caught on film on November the 28th at the Mexican colossus Popocatepetl Volcano, see video below.