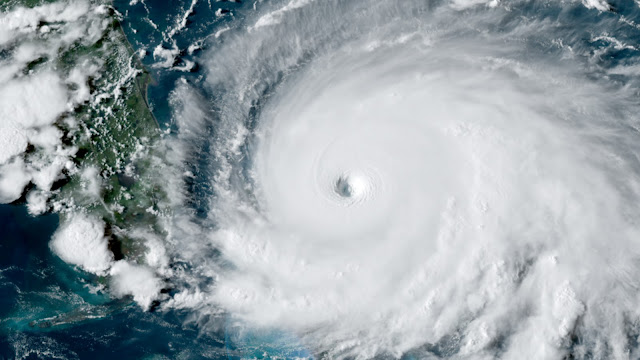 As we headed into September, four potential tropical depressions were forming in the Atlantic and the Gulf with Hurricane Dorian becoming the multi record-breaker. The record-busting Cat 5 Hurricane was confirmed as the second-strongest Atlantic storm on record with top sustained winds of 185 mph and gusts hitting 220 mph (350 KMH). At this point, Miami was warned of a possible storm surge that could push destructive waves higher than many roofs in the islands as Dorian approached. the Bahamas. Full Story

Category 5 Hurricane Dorian was heading directly for Miami and President Trump's Mar-a-Lago mansion on Palm Beach when the hurricane did something unprecedented, it parked itself over the Bahama islands for 48 hours, the storm sat almost stationary over the islands for two days, this according to experts has never happened before. NOAA's official cone showed Dorian heading straight for Miami, Trumps administration went one better, they added onto NOAA's cone an extra cone of their own, showing Hurricane Dorian potentially hitting Alabama, which later became known as Sharpiegate.

On the 18th anniversary of the September 11 terror attacks, we had another reminder of a hurricane which appeared to 'turn away' from its intended target. On Sept. 11, 2001, as terrorist attacks were unfolding in New York City, the Pentagon and near Shanksville, Pennsylvania, a hurricane was hovering off the Northeast seaboard. In one of the most chilling weather images ever taken, both Hurricane Erin, about 500 miles east-southeast of New York, and the smoke plume from the World Trade Center Twin Towers about two hours after the first tower was hit was captured in a NASA satellite image. However, Hurricane Erin that day showed uncanny characteristics coinciding with Hurricane Dorin's erratic and unprecedented stormpath over the Bahamas last week.
As the world watched in horror on the darkest day in New York's history, Hurricane Erin a category 3 storm, almost unnoticed, was heading directly toward the east coast area of New York City and the Boston area. What happened to Hurricane Erin's storm path that day is nothing short of miraculous.
During the morning of 9/11 as the towers were under attack, Hurricane Erin was on a northwesterly route heading directly for New York, about 400 miles from shore but incredibly the storm began an almost 180 deg course change turning to a northeasterly direction and heading directly away from New York City. Full Story

A powerful typhoon made landfall near Tokyo early Monday, 9th Sept, bringing strong wind and torrential rain into the Kanto eastern Japan region and disrupting traffic in the metropolitan area. Typhoon Faxai, the 15th typhoon of this year, slammed into the vicinity of the city of Chiba shortly before 5 a.m. (8 p.m. Sunday GMT), after passing near the Miura Peninsula and crossing Tokyo Bay. The Japan Meteorological Agency put local residents on alert for stormy weather and high waves. The maximum instantaneous wind speed registered 57.5 meters per second in Chiba's Chuo Ward at around 4:30 a.m. and 43.2 meters at Tokyo International Airport in Haneda at around 3:25 a.m., breaking records in respective locations. One-hour rainfall to around 12:30 a.m. totalled 109.0 millimetres in Mount Amagi in Izu, Shizuoka Prefecture, central Japan. Rainfall of 72.0 millimetres was registered in the hour to 3:50 a.m. in Naka Ward in Yokohama, Kanagawa Prefecture, and in the hour to around 4:30 a.m. in Tokyo's Edogawa Ward. About 932,000 households in the Kanto area were without power at 8 a.m. Monday, according to Tokyo Electric Power Co. That number fell to about 800,000 by the afternoon.
Typhoon Lingling has killed 3 people in South Korea, leaving thousands without power, Associated Press Published: Typhoon Lingling passed along South Korea's coast on Saturday, toppling trees, knocking out power to thousands and causing at least three deaths. Lingling made landfall in North Korea Saturday. Torrential rains and strong winds will continue to slam North Korea and adjacent parts of China. Full Story

Wildfires have been a huge concern in recent years especially this year, thousands of Indonesians prayed for rain in haze-hit towns on the islands of Sumatra and Borneo on Wednesday the 11th of Sept, as forest fires raged at the height of the dry season, the state Antara news agency reported. According to Reuters, 5,062 fire “hot spots” had been detected in six Indonesian provinces, as of Wednesday morning. Meanwhile, hundreds of firefighters across New South Wales and Queensland, Australia were battling more than 140 bushfires that have broken out near the eastern coast. Officials in Queensland said the intense flames marked the worst start to the fire season on record for the state. 2019 has brought to the attention of many people just how dangerous wildfires are now impacting our vulnerable planet. This year alone, uncontrollable fires have caused havoc in Syberia, the Arctic Circle, Alaska, Bolivia, Brazil, Chile, Southern Africa, Australia and Indonesia and the problem is becoming more intense as large areas of forestry and grassland around the world are suffering drought and water-stress.
The true devastation to wildlife has become evident after the weeks of wildfires destroyed a huge area of Bolivian forest and grassland. More than two million wild animals, including jaguars, pumas and llamas, have perished in weeks of wildfires that devastated huge swaths of Bolivian forest and grassland, environmental experts said Wednesday. The fires devastated the Chiquitania tropical savanna in the east of the country. "We have consulted the biologists of Chiquitania and we have exceeded the estimate of more than 2.3 million missing animals in many protected areas," Professor Sandra Quiroga of Santa Cruz University told AFP. Full Story

More significantly, July was the 12th consecutive month in which average temperatures were above normal nearly every day, said Brian Brettschneider, a scientist with the Alaska Center for Climate Assessment and Policy (ACCAP) at the University of Alaska Fairbanks.
Of Alaska’s 10 warmest months on record, seven have now occurred since 2004. Full Story

On the 24th of Sept, as the Caribbean and Gulf area were being battered by 2 tropical storms and just two weeks after Hurricane Dorian devastated the Bahamas a scene evolved resembling a Holywood movie epic. During the night two volcanoes erupted, the Popocatepetl volcano near Mexico City and the Poas volcano Costa Rica followed by two mag 6.0 major quakes near Puerto Rico with multiple aftershocks which occurred smash bang in the middle of Tropical Storm Karen which was sitting south of Tropical Storm Jerry. Full Story

The volcanic and quake activity proved to be a precursor of powerful seismic activity around the world, producing 7 major quakes in just 6 days along with a string of powerful smaller quakes in Pakistan and Turkey, as usual, the spike in quake activity coincided with coronal activity on the Sun and the geomagnetic storms Full Story