Northern Hemisphere battered by Typhoons Faxai, Lingling and Hurricane Dorian as China and the US come under scrutiny for altering the course of cyclones? 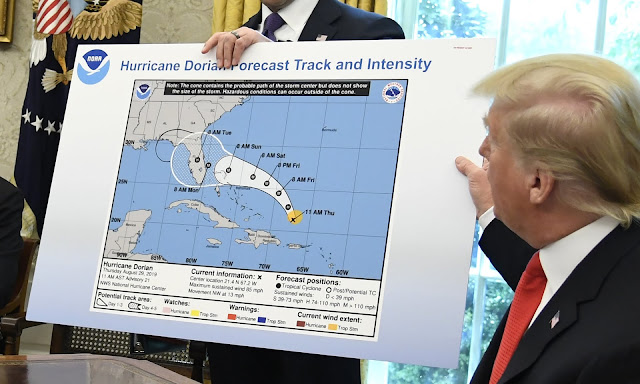 Photo the Guardian, US Administration at odds with NOAA

A powerful typhoon made landfall near Tokyo early Monday, bringing strong wind and torrential rain into the Kanto eastern Japan region and disrupting traffic in the metropolitan area. Typhoon Faxai, the 15th typhoon of this year, slammed into the vicinity of the city of Chiba shortly before 5 a.m. (8 p.m. Sunday GMT), after passing near the Miura Peninsula and crossing Tokyo Bay. The Japan Meteorological Agency put local residents on alert for stormy weather and high waves. The maximum instantaneous wind speed registered 57.5 meters per second in Chiba's Chuo Ward at around 4:30 a.m. and 43.2 meters at Tokyo International Airport in Haneda at around 3:25 a.m., breaking records in respective locations. One-hour rainfall to around 12:30 a.m. totalled 109.0 millimetres in Mount Amagi in Izu, Shizuoka Prefecture, central Japan. Rainfall of 72.0 millimetres was registered in the hour to 3:50 a.m. in Naka Ward in Yokohama, Kanagawa Prefecture, and in the hour to around 4:30 a.m. in Tokyo's Edogawa Ward.

Typhoon Faxai made landfall near the Japanese capital before 5 a.m., according to Japan's Meteorological Agency. Its strongest winds measured 129 mph at 4.30 a.m. near Chiba City. At Haneda Airport, where 138 flights were cancelled, winds peaked at 97 mph at 3.30 a.m. One person died in Tokyo from a fall-related to the storm and dozens of people in the Kanto area were injured, according to Japanese broadcaster NHK. No injuries were reported on U.S. bases. About 932,000 households in the Kanto area were without power at 8 a.m. Monday, according to Tokyo Electric Power Co. That number fell to about 800,000 by the afternoon.


According to the Daily Star, China has been filmed firing microwaves at a typhoon to change its direction, according to a claim from a conspiracy theorist. For years, researchers have claimed the US government has been using technology developed by the High-Frequency Active Auroral Research Program (HAARP) to alter weather conditions. But a new video has now surfaced that has sparked claims China is doing the same. Full story here

Which brings us closer to home, the Guardian reported, a federal agency has, "reversed course," (no pun intended) on the question of whether Donald Trump tweeted state information about Hurricane Dorian potentially hitting Alabama, upsetting meteorologists around the country. On Sunday, Trump had warned that Alabama, along with the Carolinas and Georgia, was “most likely to be hit (much) harder than anticipated”. However, the powerful hurricane took a strange unexpected course north after the hurricane's unprecedented and "strange" behaviour of parking itself directly over the Bahamas for 48 hours.

Earlier this week, record-busting Cat 5 Hurricane Dorian was confirmed as the second-strongest Atlantic storm on record with sustained winds of 185 mph and gusts topping 220 mph (350 KMH). This monster smashed into the Bahamas and then did something I have never seen before, Hurricane Dorian parked itself over the islands for almost 48 hours, it just sat there, like a giant drill boring into the Bahamas, then as the hurricane began to weaken it started moving again.
Hurricane Dorian's natural course after it left the Bahamas should have been a direct hit, bullseye, into the city of Miami but the hurricane suddenly changed course and an almost incredible 90 deg waver from its original direction West sent it Northwards along the Florida east coast and up into the Carolinas and hugging the US East Coast. Nothing unusual there, except, after parking itself over the Bamahas for 48 hours earlier in the week, Hurricane Dorian is now literally racing towards Canada.
From stationary to racing away toward Canada!
On the 25th of August Dorian was announced as a tropical storm and was moving 22 km/h
direction, 280 ° - W in the Atlantic.

Since hitting the Bahamas as a Category 5 storm on Sunday, Hurricane Dorian has unleashed torrential rain and winds of up to 185 mph, and while it weakened to a Category 4 on Monday, it didn't move on, crawling toward the United States at just 1 mph as if some unknown force was holding the storm off the coast of the US.
Jeff Masters, the meteorology director at Weather Underground, claimed steering currents at 18,000 feet above ground are too calm, and not pushing the hurricane in any direction. There is a high-pressure system in Bermuda that is keeping Dorian from heading north, as well as a low-pressure trough going east that is attempting to push Dorian to the north. These two systems are "fighting it out and neither is winning," Masters said. With no airflow pushing Dorian in any direction, it is "stationary," the National Hurricane Center said. "This is unprecedented." "We've never had a Category 5 stall for so long in the Atlantic hurricane record." Hurricanes need warm water to keep going, and storms that stall eventually dissipates because they keep churning up cold water from below the ocean's surface. Although the Bahamas and Gulf Stream are areas that do have deep warm water, Hurricane Dorian should still weaken a bit, even if it doesn't get moving.