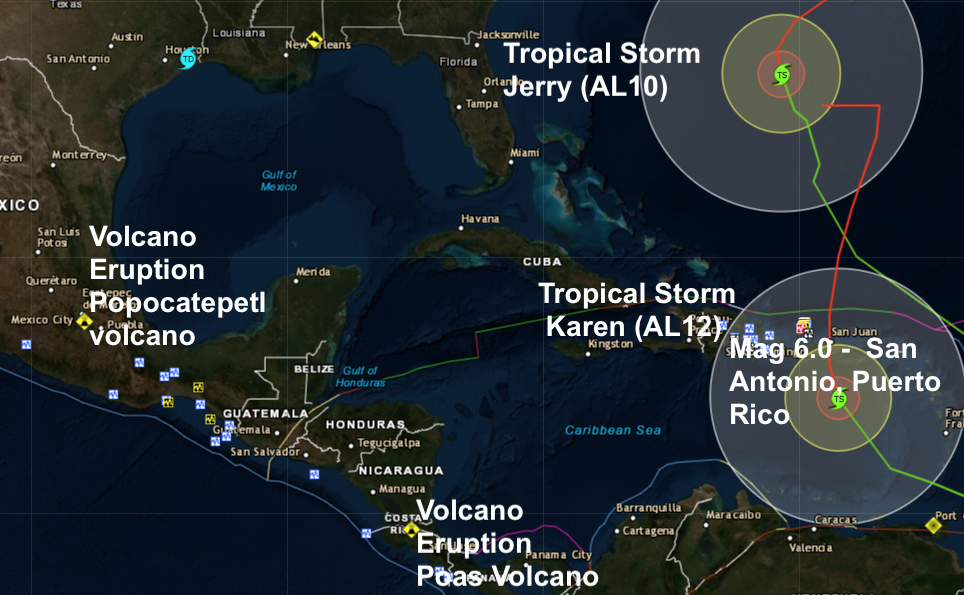 The Caribbean and Gulf area are currently being battered, just two weeks after Hurricane Dorian devastated the Bahamas we have a scene evolving resembling a Holywood movie epic.
During the night two volcanoes erupted, the Popocatepetl volcano near Mexico City and the Poas volcano Costa Rica throw into the mix two mag 6.0 major quakes near Puerto Rico with multiple aftershocks which occurred smash bang in the middle of Tropical Storm Karen which is sitting south of Tropical Storm Jerry. There were no immediate reports of casualties or damage from the earthquake, which the agency said hit at a depth of 10 km (6 miles) about 80 km (50 miles) from the northwestern coastal town of Isabela.

According to the Weather Channel, Tropical Depression Karen will bring heavy rain and gusty winds to Puerto Rico and the Virgin Islands early this week, but it's too soon to know if it will eventually affect any other land areas, including the mainland United States. Karen is centred more than 100 miles south of San Juan, Puerto Rico, and is moving north-northwestward at 10 to 15 mph.

According to Weather News, Tropical Storm Jerry will most likely turn toward the north and northeast early this week, according to the National Hurricane Center forecast. That forecast path will take Jerry near or just north of Bermuda as a tropical storm. A tropical storm warning has been issued for Bermuda, and tropical-storm-force winds (39-plus mph) could develop there by Wednesday. Bermuda could also receive 1 to 3 inches of rain through Wednesday.