Scientists worried a tipping point breached where the Amazon will no longer be able to soak and store up Carbon: The Amazon absorbs carbon dioxide and puts oxygen back into the air 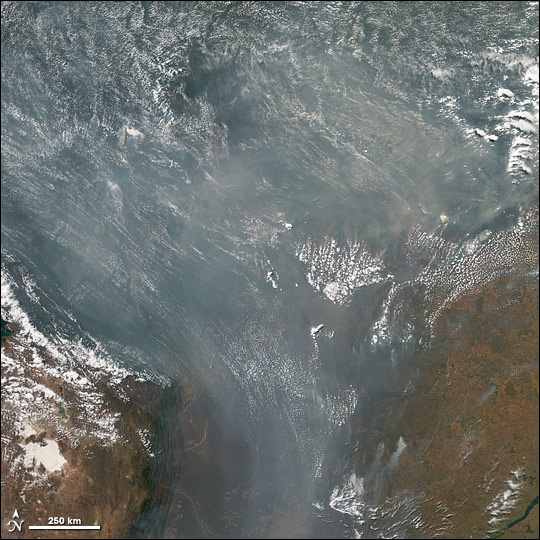 The Amazon absorbs a huge amount of carbon dioxide and puts oxygen back into the air, which in turn helps slow global warming. The Amazon also generates heavy amounts of rainfall for agriculture across South America and is home to millions of plants, animals and people.
When forests burn, Carbon is released in the form of C02, which add to Carbon levels in the atmosphere. Scientists are now worried we could reach a tipping point where the Amazon will no longer be able to soak and store up so much Carbon meaning that will go into the atmosphere, which would be yet another disaster for climate change and our already struggling planet.

Six states in Brazil’s Amazon region requested military help on Saturday to combat record fires that are tearing through the rainforest, provoking an international outcry because of the Amazon’s central role in combating global warming.

According to Reuters, The states of Para, Rondonia, Roraima, Tocantins, Acre and Mato Grosso - out of the region’s nine - have requested military assistance, according to a spokeswoman for the president’s office, a day after President Jair Bolsonaro authorized the military to step in.
The Amazon is the world’s largest tropical rainforest and its protection is seen as vital to the fight against climate change because of the vast amounts of carbon dioxide it absorbs.
Brazil has 44,000 troops stationed in its northern Amazon region that are available to combat forest fires and could send more from elsewhere in the country, said Raul Botelho, the joint chief of staff for the country’s military.
Backed by military aircraft, Brazilian troops have been deployed in the Amazon to fight fires that have swept the region and prompted anti-government protests as well as an international outcry. President Jair Bolsonaro also tried to temper global concern, saying that previously deforested areas had burned and that intact rainforest was spared. Even so, the fires were likely to be urgently discussed at a summit of the Group of Seven leaders in France this weekend. The military will use two C-130 Hercules aircraft capable of dumping up to 12,000 litres of water on fires, he said. An Associated Press journalist flying over the Porto Velho region Saturday morning reported hazy conditions and low visibility. On Friday, the reporter saw many already deforested areas that were burned, apparently by people clearing farmland, as well as a large column of smoke billowing from one fire. The municipality of Nova Santa Helena in Brazil's Mato Grosso state was also hard-hit.  Bolsonaro had described rainforest protection as an obstacle to Brazil's economic development, sparring with critics who say the Amazon absorbs vast amounts of greenhouse gasses and is crucial for efforts to contain climate change.
The Amazon fires have become a global issue, escalating tensions between Brazil and European countries who believe Bolsonaro has neglected commitments to protect biodiversity. Protesters gathered outside Brazilian diplomatic missions in European and Latin American cities Friday, and demonstrators also marched in Brazil. "The planet's lungs are on fire. Let's save them!" read a sign at a protest outside Brazil's embassy in Mexico City. Bolivia has also struggled to contain fires that swept through woods and fields. A U.S.-based aircraft, the B747-400 SuperTanker, is flying over devastated areas in Bolivia to help put out the blazes and protect forests. On Saturday, several helicopters along with police, military troops, firefighters and volunteers on the ground worked to extinguish fires in Bolivia's Chiquitania region, where the woods are dry at this time of year. Farmers commonly set fires in this season to clear land for crops or livestock, but sometimes the blazes get out of control. The Bolivian government says 9530 square kilometres have been burned this year. The government of Bolivian President Evo Morales has backed the increased cultivation of crops for biofuel production, raising questions about whether the policy opened the way to increased burning. Similarly, Bolsonaro had said he wants to convert land for cattle pastures and soybean farms. Brazilian prosecutors are investigating whether lax enforcement of environmental regulations may have contributed to the surge in the number of fires. Brazil's justice ministry also said federal police will deploy in fire zones to assist other state agencies and combat "illegal deforestation". Fires are common in Brazil in the annual dry season, but they are much more widespread this year. Brazilian state experts reported nearly 77,000 wildfires across the country so far this year, up 85 per cent over the same period in 2018. More than half of those fires occurred in the Amazon region.