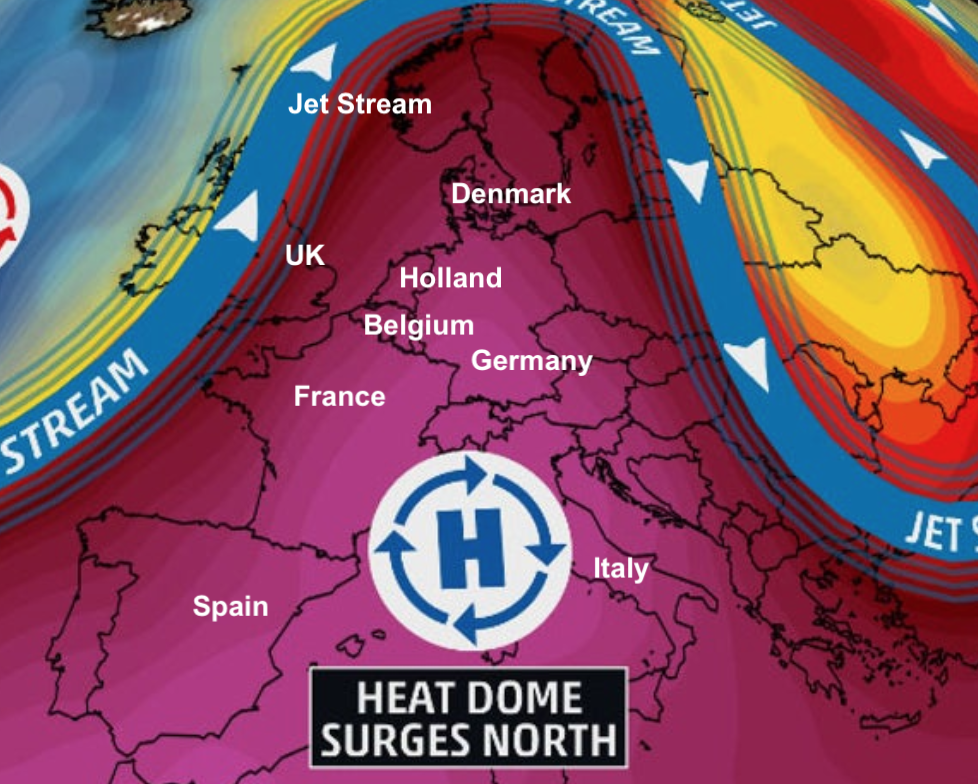 Map Credit The Weather Channel
Parts of Europe have been plunged into a second record-breaking heatwave in less than a month
France braces for another heatwave this week as its national weather service revised the country's all-time record-high temperature to 46 degrees Celsius (115 degrees F), which was recorded last month in southern France.
The French city of Bordeaux has hit its highest temperature since records began, as Western Europe braces for the second heatwave to hit this summer.
On Tuesday, Meteo France registered 41.2C (106.1F) in the south-western city, breaking a 2003 record of 40.7C.

According to The Weather Company meteorologist Hannah Findley, unprecedented 40-degree Celsius highs are also possible in parts of Belgium, the Netherlands and Luxembourg, which would smash all-time records of 38.8 degrees, 38.6 degrees and 39.9 degrees (104 deg F), respectively.
According to France24, France’s second heatwave in as many months is set to be accompanied by high humidity and a spike in air pollution levels, the weather service has warned.

Wine production in France this year will be down by between six and 13 per cent over 2018, notably because of the ongoing heatwave, the agriculture ministry said Saturday.
France was hit hard by poor weather conditions, including a heatwave at the end of June.
That and other factors meant that production should be between 42.8 and 46.4 million hectolitres -- the lowest figures in the last five years, said the ministry, based on estimates drawn up on July 12.

Just three days ago a dangerous and deadly heatwave gripped more than half of the U.S.
Tens of millions of people suffered record-setting high temperatures last weekend, with heat advisories or warnings in effect from the Midwest to much of the East Coast.

Three days later, many parts of the USA with a  cold front which will bring record July cold to parts of the Plains and South this week.
According to the Weather Channel, instead of its usual midsummer location in the northern U.S., the jet stream is plunging sharply into the East and South this week, pulling cooler and drier air deep into the South.
Cities that could set daily record lows through Friday include Oklahoma City, Dallas, Little Rock, Arkansas; Memphis, Tennessee; Mobile, Alabama; and Charleston, South Carolina. Daily record lows in these cities range from the lower 60s in Oklahoma to the upper 60s along the northern Gulf Coast and Southeast coast.
Houston could see lows in the 60s three straight mornings, which hasn't happened there in 25 years, according to the National Weather Service.