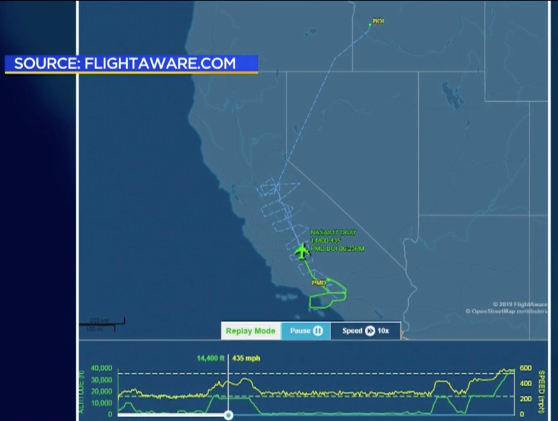 Credit CBS Los Angeles
A large jetliner spotted flying very low over the foothills Monday belonged to NASA, according to the Los Angeles County Sheriff’s Department.
The large DC-8, painted white with a blue stripe and the NASA logo on the tail, was spotted flying over Altadena at the height of afternoon rush hour in the San Gabriel Valley.
CBS2 and CBSNLA anchorwoman Jasmine Viel said she was one of the commuters who saw the plane flying by.
“It was scary, a little bit.
You didn’t know it was going to land,” she said.
“Everyone kind of stopped in their cars, looking up.
It was big and loud.”
NASA did not respond to calls to find out why the plane was flying so low but as it zig-zagging on a northeastern course the jet flew directly over the area of Coso Volcanic Field, where recently a magnitude 7.1 and a magnitude 6.6 caused an earthquake "swarmageddon" of more than 10,000 aftershocks since the first week of July.
The plane evidently flew 2,359 miles out of Palmdale that included a meandering path into Central California, across Nevada and landed in Boise, Idaho at about 7 p.m. local time.

The plane’s call sign is NASA817 and can be monitored via flightaware.com.