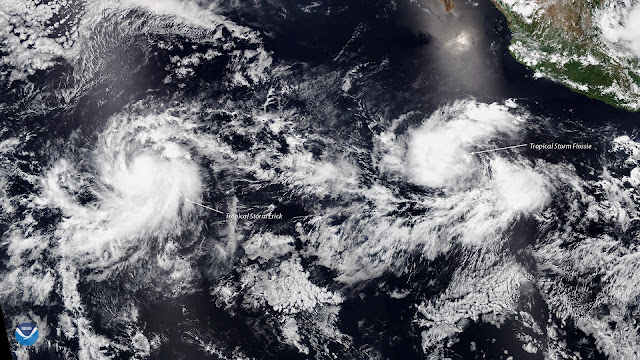 Tropical Storms Erick and Flossie, seen together in this July 28, 2019 view from the NOAA-20 satellite, are strengthening in the Eastern Pacific, according to the National Hurricane Center.

Tropical storm Erick has strengthened to hurricane category with sustained winds of 70 mph and is moving west at 17 mph.
The NHC predicts Tropical Storm Erick will continue tracking west toward Hawaii, attaining hurricane status today and potentially becoming a Category 3 hurricane within the next 2 days.

Meanwhile, the National Hurricane Center in Miami, Florida is issuing
advisories on Tropical Storm Flossie, centred over 2400 miles
east-southeast of Hilo, Hawaii.
Flossie is expected to move into the Central Pacific Hurricane Center area of responsibility late Friday.
The NHC expects Flossie to gradually strengthen, becoming a hurricane on Tuesday.

Meanwhile, as we head into August, the 2019 Atlantic season will start to peak, a Caribbean Tropical Disturbance is set to Bring Heavy Rain to Puerto Rico.
A disturbance located over the eastern Caribbean Sea is being monitored for a chance of tropical development and will send a surge of moisture into Puerto Rico and Hispañiola in the week ahead, fueling showers and thunderstorms on those islands.