Oyster fishermen claim 100 per cent of what they dredge up is dead around Biloxi, Louisiana due to yet another deadly algae bloom 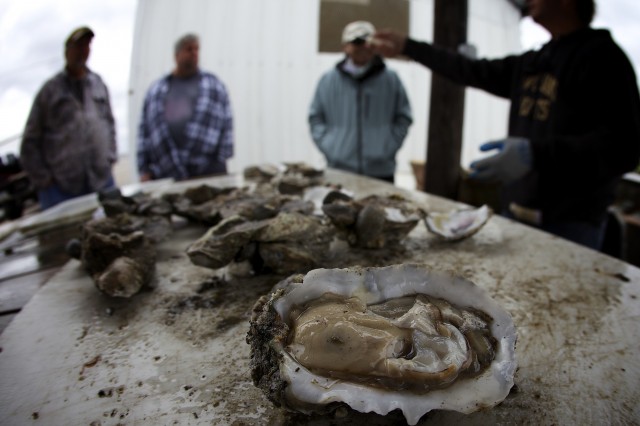 Oyster fishermen are saying 100 per cent of what they dredge up is coming up dead, which is not only a serious hit to their livelihoods but could have lasting impacts for years to come.
Fishermen will tell you part of the draw of the job is just being out on the water, but the waters near the Biloxi marsh are a little too quiet.
"North, east, west, there's usually someone harvesting someone trawling you don't see nothing, there's not one person out here," said oyster fisherman, Gregory Perez.
Gregory Perez says he's worked for years building and tending to these acres of water, or his private oyster leases.
This year was supposed to be the most lucrative for him until the oysters started dying.
"It's worthless, everything on this table is worthless," said Perez.
Perez blames this swirling blue-green algae blooms he's seen intensify in the area.
He says it's killed off all the oysters he was planning to harvest, including the young oysters that would be ready years from now.
"Twenty-five square miles of blue-green algae in this area, and everybody's oyster farm in this area they're 100 per cent completely dead," said Perez.
A spokesperson with the Department of Wildlife and Fisheries says as the oysters die, and the flood continues, the crisis is just beginning for those in the oyster industry.
"We're also going to see the aftermath of the flood in terms of additional algal blooms... they're not going to be able to recover quickly," said Fisheries Administrator, Harry Blanchet.
"We have more damage now.
This is worse than B.P. this is worse because we don't have any reproduction," said Perez.
Perez knows it will take years to rebuild his oyster farms and is hoping help comes soon.
"We need some kind of emergency funding to help us," he said.
Because watching his livelihood die and decay in front of him, he says the situation makes him sick. "I see no future as of right now, there's no future.
There's not a live oyster here to reproduce and that scares me because we don't know when we'll get that restart," said Perez.
The Department of Wildlife and Fisheries says for public waters, harvesting is down 80 per cent. Governor John Bel Edwards did request a federal fisheries disaster relief for Louisiana.
Wildlife and Fisheries say they're working with relevant agencies and collecting information, but it will take time until anything is decided.