Heatwave cooks mussels in shells along a 150 mile stretch of northern Californian coastline: Largest die-off of mussels in at least 15 years 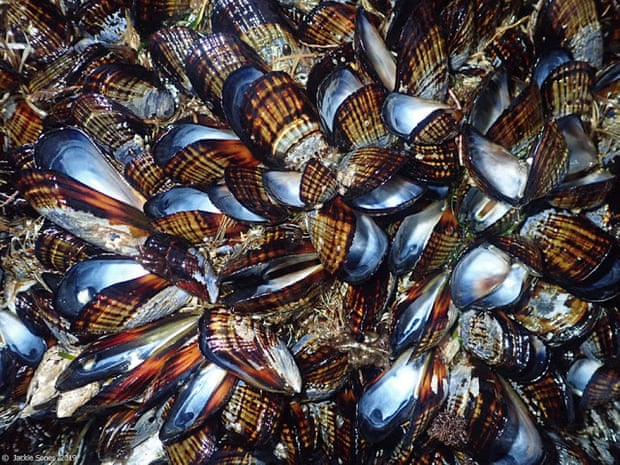 Yesterday The Big Wobble posted: Oyster fishermen in the Gulf Of Mexico are saying 100 per cent of what they dredge up is coming up dead, which is not only a serious hit to their livelihoods but could have lasting impacts for years to come.
Today a report in the Guardian claims, thousands of dead mussels, their shells gaping and scorched and their meats thoroughly cooked along a 150 mile stretch of northern Californian coastline.
According to the Guardian, a record-breaking June heatwave apparently caused the largest die-off of mussels in at least 15 years at Bodega Head, a small headland on the northern California bay, with a similar mass mussel deaths at various beaches across roughly 150 miles of coastline.
While the people who flocked to the Pacific to enjoy a rare 80F beach day soaked up the sun, so did the mussel beds – where the rock-bound molluscs could have been experiencing temperatures above 100F at low tide, literally roasting in their shells.

In 2011 reports from scientists revealed starfish were melting, and shellfish populations were breaking down from Alaska all the way down to Mexico.
The die-off affects the rest of the seashore ecosystem.
“Mussels are known as a foundation species.
The equivalent is the trees in a forest – they provide shelter and habitat for a lot of animals, so when you impact that core habitat it ripples throughout the rest of the system.