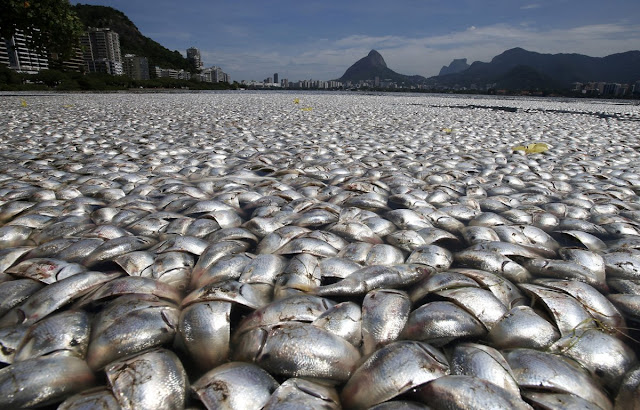 Everywhere on this planet, from land, oceans and sky are reeling from mankind's devastation, greed, pollution and destruction, according to a new compelling UN report, released yesterday.
One million animal and plant species are staring down the barrel of the extinction gun and all nature is dying at an unprecedented speed.
However, the UN has put a positive spin on this astonishing decline, claiming these trends can be halted, the decline can be halted, sure it can but it won't because mankind is too greedy.

How could the decline be halted, what would mankind have to do to stop the decline, is there a possibility to stop mankind from destroying his own home.

Well, we could stop as of today, drilling for oil, burning coal and other fossil fuels, close down all nuclear power stations, replace 100 million hectares of tropical forest by planting saplings, stop using pesticides, stop trawling and overfishing our oceans, begin replacing eroded soil (soil is being degraded as never before), stop manufacturing plastic, stop dumping 400 million tonnes of heavy metals, solvents, toxic sludge and other wastes annually into the waters of the world, all the above would be a smart way to halt the decline, so, which world leader would be the first to implement the above changes? None of them right?

No, UN, the decline will not be halted because our "industrious" leaders won't allow it to be halted. By 2050, it will be "GAME OVER" for this planet as a desirable place to live, we crossed the tipping point many years ago, the death of this planet is now unavoidable.

Throw into the mix, global warming and climate change, record heat, record floods, record cold and snowfall, crippeling droughts, hurricane and typhoon increase due to warmer waters, increasing wildfires, rising water levels and it's not difficult to imagine just how hard it will be to erk a life in the near future, especially for our kids who are already having it tough.