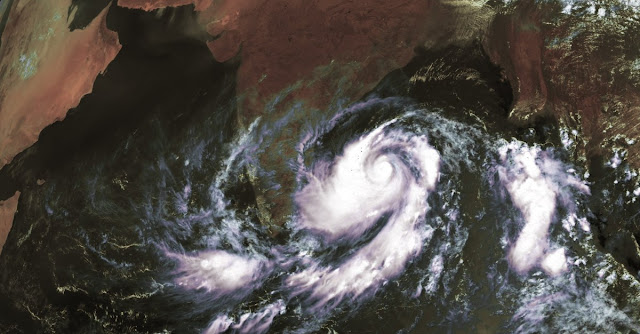 Credit cycloneoi.com
Tropical Cyclone Fani is forecast to become a formidable cyclone in the Bay of Bengal and is likely to pose a danger to parts of eastern India and Bangladesh late this week.
Cyclone Fani is expected to intensify into an “extremely severe” storm as it heads toward the coast of the eastern Indian state of Odisha, the India Meteorological Office said on Tuesday.
According to Reuters, the storm is currently in the Bay of Bengal about 690 km (414 miles) east-southeast of Chennai and moved north-northwest at a speed of 16 km per hour (10 miles per hour) over the past six hours, the office said.
Fani is generating maximum sustained winds of 85 knots, or about 157 kph (98 mph), according to a storm advisory from the U.S. Navy’s Joint Typhoon Warning Center.
The India Meteorological Office has forecast heavy rainfall in Odisha and in some parts of the state of Andhra Pradesh in the next few days.

Meanwhile, the death toll in cyclone-hit northern Mozambique has risen to 38, officials say, as aid workers struggle to reach the worst-affected areas.
Cyclone Kenneth struck the southern African nation last week with winds of 220km/h (140mph), flattening villages and damaging thousands more homes.
It comes just weeks after Hurricane Idai killed more than a thousand people in Mozambique, Zimbabwe and Malawi.
Kenneth is the first tropical cyclone with the equivalent of hurricane strength to strike Mozambique's northern province of Cabo Delgado since modern record-keeping.
This is the first time in recorded history that two strong tropical cyclones have hit Mozambique in the same season.
Hurricane Kenneth is expected to dump record amounts of rain on an already sodden Mozambique, with experts predicting Kenneth will dump twice as much rain on the country as Hurricane Idai.


According to NOAA, Tropical Cyclone Kenneth roared ashore Thursday, becoming the first Category 4 storm in the last 60 years to make landfall over Mozambique’s northeastern Cabo Delgado province. The day-night band of NOAA-20’s Visible Infrared Imaging Radiometer Suite (VIIRS) sensor captured this view of the historic storm at 6:10 p.m. ET, several hours after it made landfall.
“This is the first time in recorded history that two strong tropical cyclones have hit Mozambique in the same season, with Tropical Cyclone Kenneth following on the heels of Tropical Cyclone Idai, which made landfall on 14 March, leaving more than 600 people dead and an estimated 1.85 million people in need in Mozambique alone,” according to the UN Office for the Coordination of Humanitarian Affairs (OCHA).
Kenneth made landfall near Pemba around 4 p.m. local time (10:15 a.m. ET) on Thursday afternoon, packing winds of 140 mph, according to the Joint Typhoon Warning Center. Prior to landfall, the Mozambican government and Red Cross volunteers evacuated some 30,000 people in communities “where the concern of flooding, erosion and landslides was particularly high,” OCHA noted.
On Wednesday, the powerful storm passed through Comoros, killing three people and injuring at least 20 others before taking aim at Mozambique’s coast. In Comoros, OCHA reports that the storm downed trees and powerlines, flooded streets and displaced at least 1,000 people.
Officials are still evaluating the extent of the damage Mozambique, Tanzania and Malawi incurred as a result of Tropical Cyclone Kenneth.