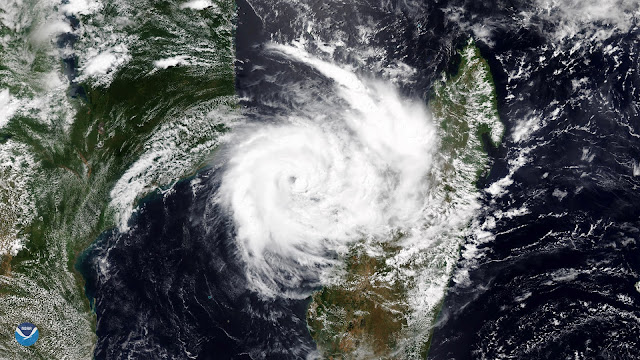 At least 10 people have been killed after heavy rains deluged two flood-prone provinces of Mozambique, the UN said Monday, as meteorologists issued a cyclone warning.
Six people died in the central Tete province in recent days while four were swept away in the coastal Zambezia province, the UN Office for the Coordination of Humanitarian Affairs said in a report.

More than 62,000 people have so far been affected by floods in the two provinces as well as in the northern Niassa province.
"At least 10 deaths reported, and 62,975 people were affected by the floods," the UN said.
National authorities have warned that "at least 120,000 people are at risk of flooding and heavy rains in the coming days," the UN said.


Tropical Cyclone Idai rapidly strengthened to a Category 3 storm in the warm waters of the Mozambique Channel over the weekend. This image, seen from the NOAA-20 polar orbiting satellite on March 10, 2019, shows Idai brushing the island of Madagascar before it gradually moves south and west toward the coast of central and southern Mozambique.
In its latest update, the Joint Typhoon Warning Center said the storm had sustained winds of 120 mph. Forecasts show the storm could strengthen to a Category 4 storm with winds near 145 mph late Tuesday into Wednesday local time.
According to NOAA's historical hurricane tracks database, if Idai makes landfall in Mozambique as Category 3 storm, it would be only the fourth tropical cyclone of that intensity or stronger since satellites began routinely tracking storms in the late 1960s. Even if winds slacken before the storm reaches land, Idai is expected to drop heavy rain and cause damaging storm surge and flooding along the Mozambique coast.
This image was captured by the NOAA-20 satellite's VIIRS instrument, which scans the entire globe twice daily at a 750-meter resolution. The VIIRS sensor provides high-resolution visible and infrared imagery of Earth's atmosphere, land, and oceans, and helps atmospheric scientists monitor severe weather events such as hurricanes and tropical storms.

Typhoon Wutip, the strongest February storm seen in the western Pacific Ocean in 70 years, passed south of Guam
On Feb. 23, Wutip became a rare February super typhoon – just shy of Category 5 strength – with sustained winds of 155 mph. According to NOAA's Historical Hurricane Tracks database, only three other February storms in the Northwest Pacific basin have reached at least Category 4 intensity since records began in the 1940s.