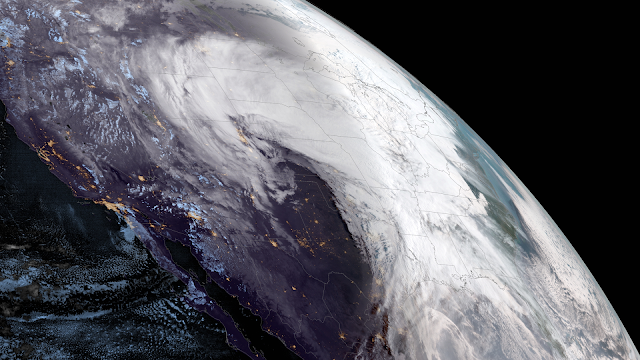 Picture NOAA
The long harsh winter of 2019 has tightened its grip on the US this week after record snowfall and record cold any thought of Spring on the back burner
NOAA’s GOES West satellite captured this GeoColor limb view of the powerful winter storm system that’s expected to intensify before sweeping eastward across much of the Central U.S.
Blizzard warnings are already in effect from northeastern Colorado into southeastern Wyoming and across western Nebraska and southwestern South Dakota, according to the National Weather Service Weather Prediction Center (WPC). Heavy rains, severe thunderstorms, isolated flooding, heavy snow and blizzard conditions associated with this storm could lead to “extremely dangerous” travel conditions. In the areas mentioned above, the WPC warns that visibility will drop to near zero during the height of the storm.
“You risk becoming stranded if you attempt to travel through these conditions,” the WPC tweeted.
As of 11:16 a.m. 1,417 flights within, into or out of the United States were cancelled, according to FlightAware.com. Denver International Airport and Dallas-Fort Worth International Airport were among the airports most affected by the impending storm with more than 1,000 and nearly 140 cancellations respectively.
Parts of the southern and central High Plains, which are on the southern side of this storm, are expected to experience very high winds with sustained speeds of up to 30-40 mph and gusts of over 60 mph.
The major winter storm is hitting the Central U.S. from the Rockies across all of the Plains into the Upper Mississippi Valley this week, delivering blizzard conditions, severe thunderstorms and isolated flooding.
NOAA meteorologists say the weather system rapidly intensified and has reached a scientific classification called bombogenesis. This phenomenon is a rare one for the landlocked region and has the potential to break all-time, low-pressure records for parts of Colorado and Kansas. Millions of people are under warnings for winter storm, blizzard and high wind.