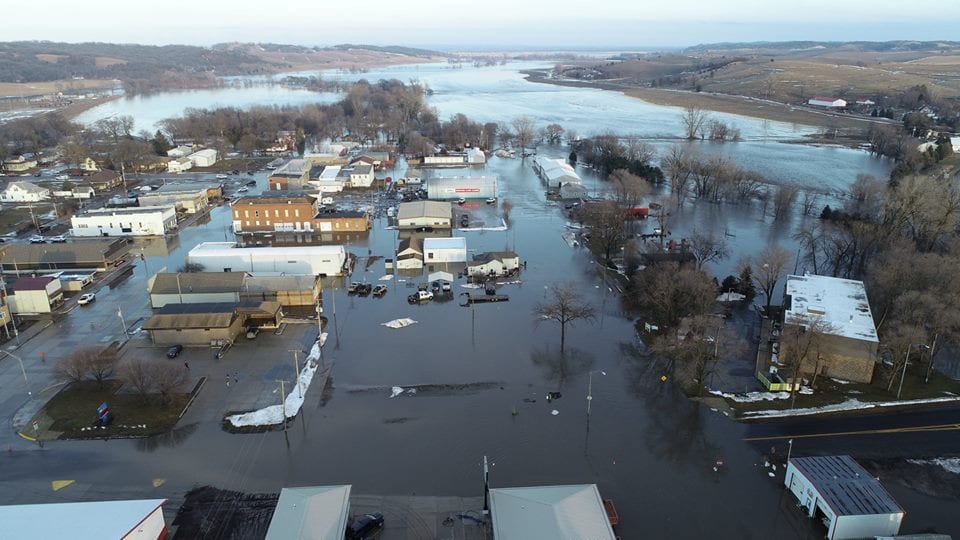 The worst flooding in more than 50 years is causing grave concern in the Plains and the Midwest, dams are failing and preparations were being made to shut down a nuclear power plant along the rising Missouri River.
According to the Weather Channell, a dam failed in Spencer, Nebraska, and another dam was at high risk of failing in north-central Nebraska.
The National Weather Service's Omaha office was forced to evacuate Friday due to the flood threat.
A Nebraska farmer was killed trying to rescue a stranded motorist.

The Missouri River reached near-record levels after Midwest and Great Plain streams were swelled by a massive storm that soaked fields and dropped heavy snow from Colorado to Canada this week.
At Rulo, Nebraska, Missouri was forecast to crest within 6 inches (152 millimetres) of its record height set in June 2011, the National Weather Service said.
Further downstream in St. Joseph, Missouri, it's expected to reach within a foot of its all-time high.
While weather conditions have eased, rivers throughout the Midwest and Great Plains will remain high through the weekend, said Marc Chenard, a senior branch forecaster at the Weather Prediction Center.
Nebraska Public Power District's Cooper nuclear plant will close when Missouri reaches 901.5 feet above sea level, which is forecast for early Saturday morning, said Mark Becker, a utility spokesman.
The staff has placed sandbags along the river levee and the plant itself should remain "high and dry" because it was built 903 feet above sea level, he said.
After surveying the extensive flooding from the air, Nebraska Gov. Pete Ricketts said in a Friday press conference that it was the "most widespread flooding damage we've had in the last half-century."

Almost three thousand people have been evacuated from the worst affected areas, however, the main worry is the thousands of livestock left stranded.