Cyclone sandwich! Two powerful cyclones Trevor and Veronica both expected to make landfall this weekend in northwest and northeast of Australia 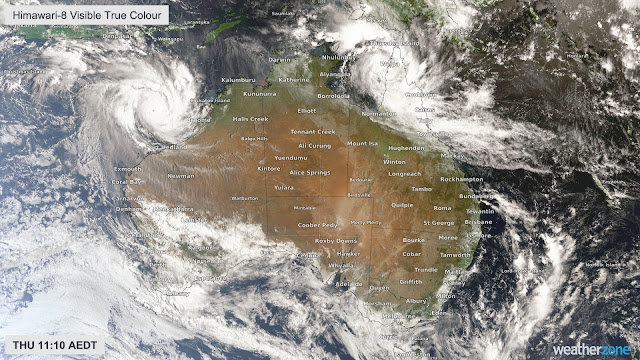 Two powerful cyclones have sandwiched northern Australia and both are expected to make landfall this weekend.
Tropical Cyclone Trevor will make its second landfall this weekend in the northeast after strengthening, with winds expected to reach almost 100 mph.
Evacuations have already occurred and an emergency was declared in parts of the Northern Territory.
On the northwestern part of the country, a very powerful Tropical Cyclone Veronica will also make landfall during the weekend.

According to the Weather Channell, two tropical cyclones, Trevor and Veronica, are expected to bring heavy rainfall, flooding and damaging winds to two parts of Australia into this weekend.
Up first is Tropical Cyclone Trevor, which actually already made the first landfall earlier this week as the equivalent of a Category 3 hurricane in the Cape York Peninsula, in northern Queensland.
Heavy rain and strong winds there resulted in downed trees and power outages, as well as closed schools and roads. More than 10 inches of rain has fallen over the past week in parts of Cape York Peninsula and wind gusts up to 73 mph have been measured.
Trevor weakened over land but has now emerged into the Gulf of Carpentaria where it is expected to strengthen before making another landfall in the Northern Territory Saturday, local time. It is currently forecast to be the equivalent of a Category 2 or 3 hurricane when it strikes the Northern Territory, according to the Joint Typhoon Warning Center.
Heavy rainfall, dangerous storm surge and strong winds are expected near where the centre of the storm tracks. Gusts over 75 mph may develop Friday night, local time, along with the Northern Territory coast, with increasing winds into Saturday.