Weather wars! This could be “one of greatest snow events in decades” Washington Gov. to declare a state of emergency as Maya arrives 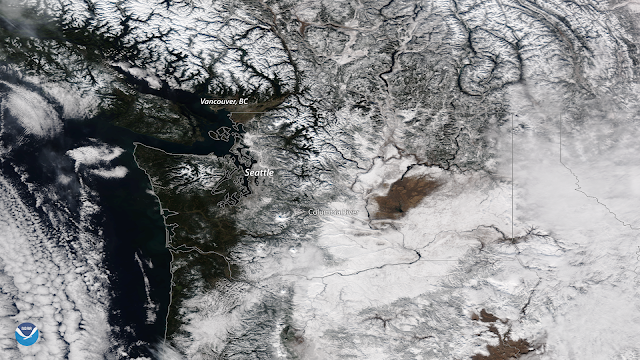 photo credit NOAA
Forecasters have said this could be “one of greatest snow events in decades”.
Winter Storm Maya arrived in the Northwest of the US, Friday.
Washington State is bracing for its second snowstorm this weekend and meteorologists are forecasting yet another to hit next week, leaving Washington Gov. Jay Inslee to declare a state of emergency as Maya arrived yesterday.
According to the Weather Channel, Seattle and other parts of Washington and the Pacific Northwest felt the full wrath of Winter Storm Maya as heavy snow fell Friday. In Washington, Gov. Jay Inslee declared a state of emergency as conditions worsened Friday afternoon.
"Weather forecasters predict this may be a storm unlike one we've seen in many years," the governor said in the release.
Up to half a foot of snow is possible from the Friday-Saturday storm throughout the region.
Officials say travel could be very difficult and that blowing snow could contribute to reduced visibility.
According to the Daily Express, earlier this week, Seattle was hit by the first snowstorm, with 2.7 inches blanketing the region - up from the 0.7 inches on average for February.
Weather.us meteorologist Ryan Maue said: “This February in Seattle is going to be remembered for brutal winter weather for many folks not used to it.”
In Portland, the other major city in the Pacific Northwest, 1 to 4 inches of snow is expected.
Snow and cold are also forecast for interior Oregon and Washington as well as for much of northern California, the National Weather Service said.