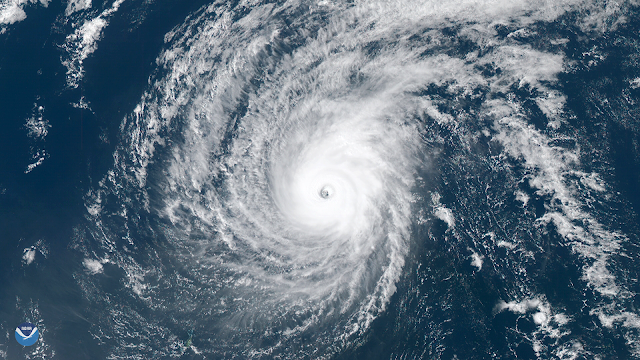 Credit NOAA
Typhoon Wutip, the strongest February storm seen in the western Pacific Ocean in 70 years, passed south of Guam and may brush the northern Philippines later this week. This visible imagery, captured by Japan's Himawari-8 geostationary satellite on Feb. 25, 2019 (12:35 a.m. ET), shows Wutip's distinct eye as it churned through the Pacific.
On Feb. 23, Wutip became a rare February super typhoon – just shy of Category 5 strength – with sustained winds of 155 mph. According to NOAA's Historical Hurricane Tracks database, only three other February storms in the Northwest Pacific basin have reached at least Category 4 intensity since records began in the 1940s.
Wutip passed less than 200 miles south of Guam on Feb. 23, battering the U.S. territory with tropical-storm-force winds and heavy rain. An update from the Joint Typhoon Warning Center issued Monday morning (Feb. 25) showed Wutip's sustained winds were still near 149 mph as the storm moves west-northwest toward the Philippine Sea.