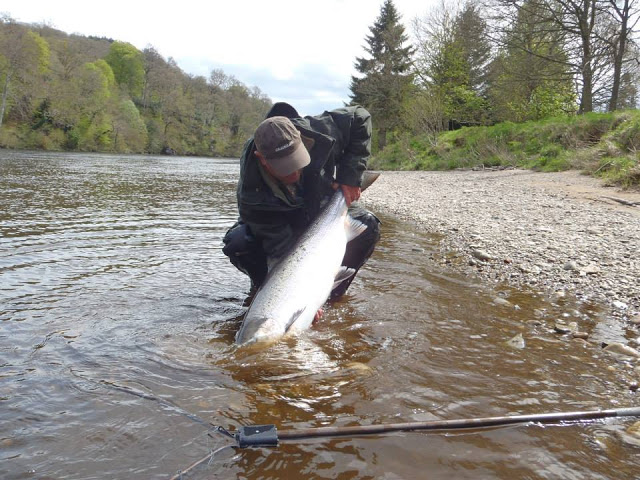 Salmon-fishing. Scotland was the best place in the world for salmon fishing but some beats on famous rivers like the Spey and the Nith recorded not a single salmon caught during the entire season. Photo blogspot.com

Record warm summers in the Pacific Northwest are adding to the threats facing salmon.
According to the Weather Channel, the salmon was said not to have stood a chance and became "cooked" in rivers and streams.
The salmon population is already in drastic decline due to overfishing, habitat loss and pollution.
Now higher temperatures in rivers and streams are killing adult salmon before they can reproduce.
Dwindling winter snowpack is also shrinking rivers and streams.
Fish Hatchery workers report seeing more perish in the stream beds before they can spawn.
Hatcheries are trying to help by adding aerators, and increasing water flow in some streams.
The federal government has issued a disaster declaration for Alaska's pink salmon fishery and several other salmon and crab fisheries along the West Coast. Gov.
Bill Walker requested the declaration after the 2017 pink salmon harvests in Kodiak, Prince William Sound, Chignik and lower Cook Inlet came in far below forecast, the Alaska Journal of Commerce reported.
The disaster declaration granted by U.S. Secretary of Commerce Penny Pritzker gave Kodiak and the other Alaska fisheries the ability to seek disaster relief assistance from Congress because of the unexpected large decreases in salmon returns.

The demise of salmon is even worse in Scotland...
It used to be the best salmon fishing in the world
But now Global warming is being blamed for Scotland's worst salmon season in living memory.
Some beats on famous rivers like the Spey and the Nith recorded not a single salmon caught during the entire season.
Just two salmon were caught on the River Fyne in Argyll this year, where once more than 700 were caught each season.
The number of fish caught by anglers has been so low that some estates have stopped selling permits for once-popular beats because there is no fish to catch.
Tourism has been hit, sales of salmon tackle have slumped and ghillies have lost their jobs.
Experts believe rising temperatures blamed on global warming have badly hit the salmon's feeding grounds with related changes in current patterns also affecting their migration.
Roger Brook, director of the Argyll Fisheries Trust, said: "Salmon are in decline everywhere but they're declining more on the west coast of Scotland and they're declining more the further down the west coast you go.
"It's dreadful now in Argyll.
It's a crisis in Argyll.
I don't know whether it's too late now to put it right."
This year's cold spring and the summer heatwave created the "perfect storm" for poor fishing conditions.
But experts believe the steep decline in numbers since the 1960s is deep-rooted and warn the future is bleak.
Survival rates for salmon at sea have fallen as low as 3 per cent with global warming and ocean fishing fleets among the likely causes.
Professor Ken Whelan, a leading salmon specialist investigating the downturn, said: "Absolutely there's a crisis in salmon fishing.
What we have now is a situation where you're looking at very modest numbers of fish coming back and you really can't afford to lose any from any kind of man-made effects."
Andrew Flitcroft, the editor of Trout and Salmon magazine, said:
"This has been undoubtedly the worst season I've witnessed in my lifetime." The Scotsman