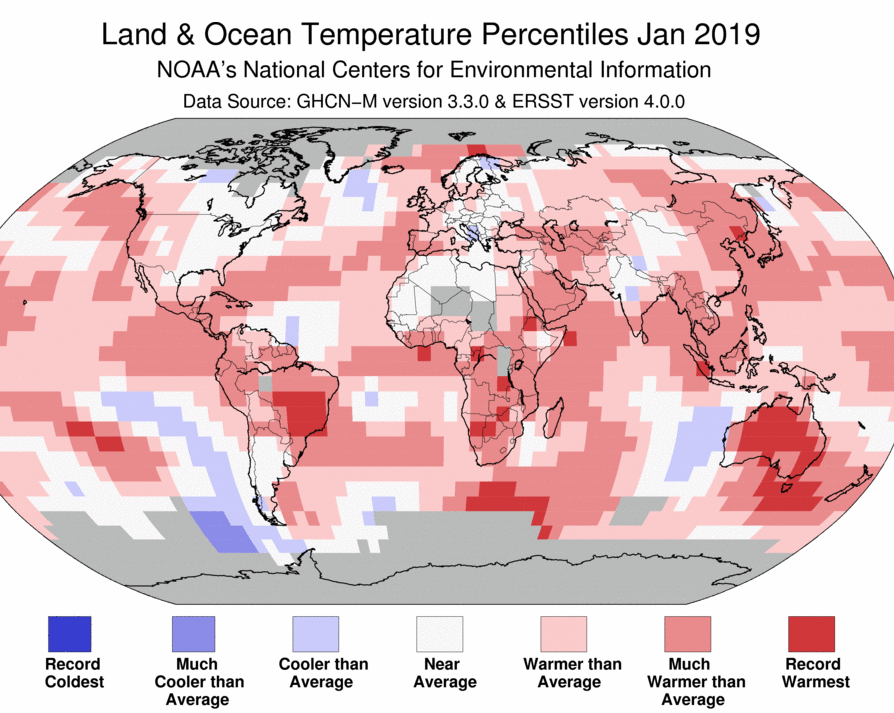 If you live in Australia you may be surprised to learn that January 2019 was only the third warmest on record, you may also be equally surprised in Canada the US and Greece to learn that according to NOAA, no land or ocean areas had record-cold January temperatures.

The globally averaged temperature over land and ocean surfaces for January 2019 tied with 2007 as the third highest for the month of January in the NOAA global temperature record, which dates back to 1880.

The January temperature across global land and ocean surfaces was 1.58°F above the 20th century average of 53.6°F.
This value tied with 2007 as the third highest for January in the 140-year record.
Januaries 2016 (+1.91°F) and 2017 (+1.64°F) were warmer.
The 10 warmest January global land and ocean surface temperatures have all occurred since 2002.
Record-warm January surface temperatures were present across much of Australia and its adjacent Southern Ocean waters, southern Brazil, the ocean off the south coast of South Africa, and across parts of Africa, Asia, and the southeastern Pacific Ocean.
No land or ocean areas had record-cold January temperatures.

The January globally-averaged land surface temperature was 2.72°F above the 20th century average of 37.0°F.
This was the fourth highest January land global temperature in the 1880–2019 record, trailing behind 2007 (warmest), 2016 (tied second warmest), and 2017 (tied second warmest).
The most notable warmer-than-normal land temperatures were present across much of Australia and across parts of northeastern and southwestern Asia, where temperatures were 7.2°F above average or higher.
The most notable cool temperature departures from average during January were observed across much of northern North America, with temperatures 1.8°F below average or less.
On a continental level, Oceania had its warmest January since continental records began in 1910, while South America and Asia had their fifth warmest January on record.
Meanwhile, North America’s January 2019 temperature was the coldest January since 2011.
The January globally averaged sea surface temperature was 1.17°F above the 20th century monthly average of 60.5°F – the third highest global ocean temperature for January in the 1880–2019 record. The record of January global ocean temperature was set in 2016.
The year 2017 was the second warmest on record.
The January average Arctic sea ice extent was the sixth smallest in the 41-year record at 332,000 square miles (6.0 per cent) below the 1981–2010 average, according to an analysis by the National Snow and Ice Data Center using data from NOAA and NASA.
Sea ice coverage was below average in the Baffin Bay, as well as the Barents, Okhotsk, and Bering Seas.
Antarctic sea ice extent during January was 450,000 square miles (23.4 per cent) below the 1981–2010 average, the second smallest January extent on record. Only the Antarctic sea ice extent in January 2017 was smaller.
According to data from NOAA and analyzed by the Rutgers Global Snow Lab, the Northern Hemisphere snow cover extent during January was 140,000 square miles above the 1981–2010 average.
This ranked near the median value in the 53-year period of record.
The North American and Eurasian snow cover extents were each slightly above average.