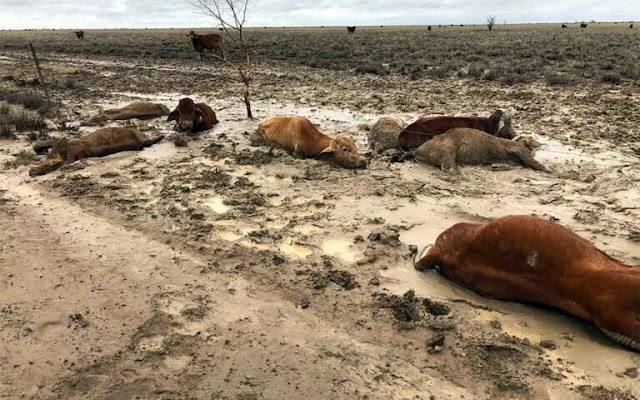 Authorities are beginning to realise the extent of the record-breaking floods in Queensland after more than a year's rain fell in just seven days.
According to Reuters, authorities planned to drop fodder to stranded cattle in Australia’s flooded far north on Friday where vast parts of the outback are under-water and livestock losses are estimated in the hundreds of thousands. 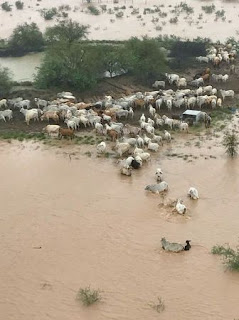 Photo in.news.yahoo.com
Torrential rains that lashed the coastal city of Townsville in Queensland state this week have swept inland and flooded grazing land gripped by severe drought for years.
Pictures posted on social media showed scores of cattle trapped on patches of high ground surrounded by water, or dead and dying in the mud.
“We’ve had a year and a half of rainfall in about seven days,” cattle grazier Michael Bulley told Reuters by phone from Bindooran Station west of Julia Creek in Queensland’s outback.
Bulley said he flew over his three properties by helicopter and saw water stretching for miles in each direction.
He estimated up to 60 per cent of the cattle he had fed through the drought had been killed by the flooding.
“It’s devastated the country...there’s stock dead everywhere,” he said. “Not just cattle, it’s sheep, kangaroos, wild pigs, they’ve all died and suffered from it.”
The weather bureau said a wide arc of outback stretching some 400 km (250 miles) from Mt. Isa, an outback mining town, to Richmond in the east was inundated. The full scale of the disaster would not be known until the clouds cleared.