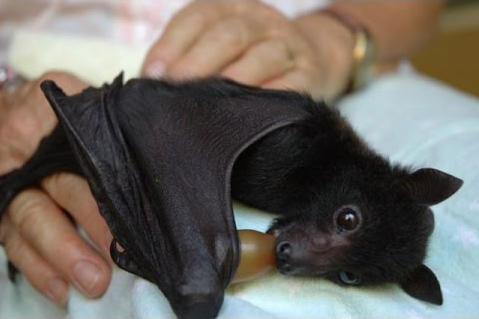 Cute but deadly...
As the heatwave is still baking eastern NSW, Sydney, temperatures are expected to peak on Thursday and Friday with much of the city basin experiencing temperatures 10C above average.
Western Sydney suburbs will swelter with temperatures up to 43C in Richmond and 45C in Penrith on Friday.
New South Wales health officials have issued a bat danger alert for the Hunter New England region with a person bitten or scratched every second day, including two by animals infected with a virus similar to rabies.
Public health physician David Durrheim says the number of bites or scratches inflicted on people in the region in such a short period of time is unprecedented.
"The seven that we have had in the last two weeks is certainly higher than we've seen in comparative periods," he said.
"Two of the bats submitted for testing have actually had lyssavirus infection, so it is a real concern for us and for those people who have been exposed.
"A few of these were bat carers but there were a number of members of the public, and they are the people we are really concerned about because they haven't been vaccinated.
"They are unprotected and they don't know how to use personal protection equipment safely.
"They really are at risk of a potentially fatal infection."
Extreme heat is being blamed for the flying foxes and bats becoming ill and falling from trees.
"Hot weather has resulted in some bats suffering ill health and getting caught in wires or other strange places, and people trying to assist them have unfortunately got scratched or bitten," Dr Durrheim said.
Scientists have long urged people to exercise caution when approaching flying foxes in soaring temperatures.
The New South Wales Environment Department is aware of the risks and has published guidelines on dealing with the animals in sweltering conditions.
"As flying foxes experience heat stress, they are likely to exhibit a series of behaviours indicating [the] progressive impact of that stress," the department said.
"These include clustering or clumping, panting, licking wrists and wing membranes, and descending to lower levels of vegetation or to the ground.
"Black flying foxes tend to start dying above about 42 degrees Celsius, and grey-headed flying foxes above about 43C."
Doctors say the health risk potentially posed by bats cannot be ignored, as they can carry the rabies-like virus Australian bat lyssavirus (ABLV).
"The clinical symptoms are almost just as awful as rabies, and once the disease starts it can't really be effectively treated, and almost everyone dies," Dr Durrheim said.
"People are actually compassionate towards these animals and don't realise that handling them can cause more harm, both for the animals and themselves."
Fiona McBurney from the group Wildlife Aid Upper Hunter says experts must be called in to deal with bats in distress.
"[It's important to] get the right people involved - our bat carers are immunised and trained to handle these bats," she said.
"If you see a distressed bat, call a wildlife carer to help with the situation and they will cover them with towels to keep them restrained."
The Office of Environment and Heritage said people must meet strict protocols before they could become a bat rescuer.