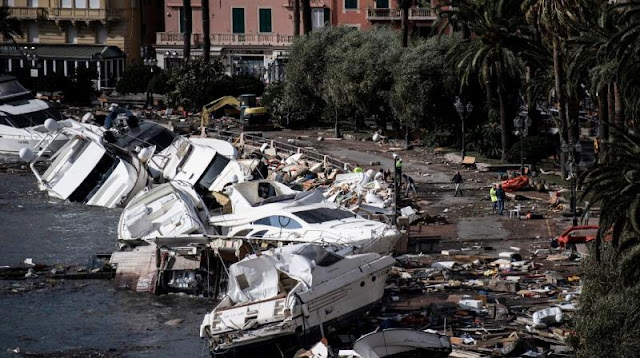 The deadly extreme weather which has devastated parts of Italy this week has claimed another two more lives bringing the total to 17, however, winds of up to 180 kph (112 mph) have laid waste to vast swathes of forest.
According to Reuters,  many of the victims to date have been killed by falling trees. Coldiretti, the association of Italian agricultural companies, said in a statement that gales had destroyed around 14 million trees, many in the far north.
Areas from the far northeast to Sicily in the southwest have been affected by the storms, with the worst damage in the northern regions of Trentino and Veneto - the region around Venice - where villages and roads have been cut off by landslides.
In the Alps near Belluno, 100 km (60 miles) north of Venice, pine trees and red spruces were snapped wholesale like matchsticks.
The surface of the Comelico Superiore dam, farther north near the Austrian border, was covered with the trunks of trees that had fallen into the Piave river.
“We’ll need at least a century to return to normality,” Coldiretti said.
Many of the squares and walkways of Venice itself have been submerged in the highest floods the canal city has seen in a decade.