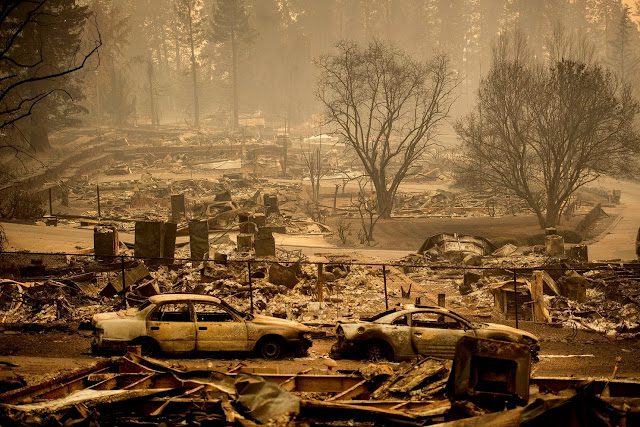 Photo Washington Post
The number of people missing in northern California's devastating wildfire has leapt to more than 600, and seven more bodies have been found, according to local authorities.
The missing persons' list has doubled since earlier on Thursday.
The Camp Fire, the state's deadliest and most destructive blaze, has killed at least 63 people. Nearly 12,000 buildings have been destroyed.
According to Reuters, thousands of additional structures are still threatened as firefighters, many from distant states, laboured to contain and suppress the flames.
The revised roster of 630 missing people is up from 297 listed on Thursday by the Butte County Sheriff’s Office.
Sheriff Kory Honea on Thursday said the remains of seven victims have been located since Wednesday's tally of 56. Nearly 300 people reported missing have been found alive and the list of missing would fluctuate, he said.
A.P. Reports, smoke masks, eye drops, no outdoor exercise, this is how Californians are trying to cope with wildfires choking the state, but experts say an increase in serious health problems may be almost inevitable for vulnerable residents as the disasters become more commonplace.
Research suggests children, the elderly and those with existing health problems are most at risk.
Short-term exposure to wildfire smoke can worsen existing asthma and lung disease, leading to emergency room treatment or hospitalization, studies have shown.