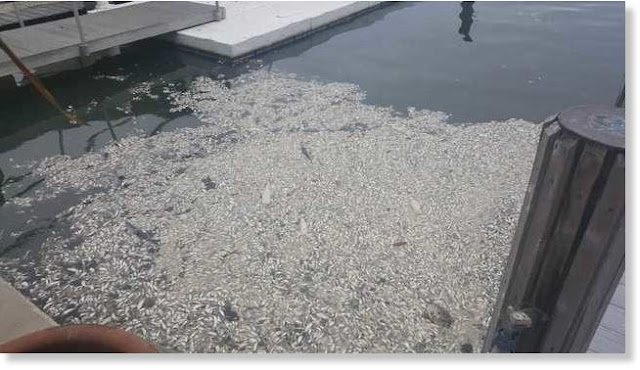 Thousands of rotting fish carcasses washed into Moorings Bay on Sunday and were still there Monday afternoon, but no one knows what killed them - or when they'll go away.
Moorings Bay is one of several areas that experienced fish kills over the weekend, Naples' Natural Resources Manager Stephanie Molloy said.
"We've had dead fish wash up on a few beaches, and then the tides and currents push them into the canals," she said. A bloom of a diatom, called Cylindrotheca, is one possible cause of the dead fish, Molloy said.
"It's complex, and we don't know the exact cause," she said.
"It could be related to the diatom. ( algae)."
Cylindrotheca first appeared last week, turning the water a deep murky brown.
Although the bloom is nontoxic, it can still cause fish kills, according to a city of Naples news release.
"Cylindrotheca can cause low dissolved oxygen waters, which cause fish die off," the release states. "This diatom is also mucilage-producing, causing clogging of fish gills, a direct cause of fish die off." The fish kills could also be the result of red tide, Molloy said.
Although recent water samples indicate the toxic red tide algae has all but vanished from Naples shores, patches of the bloom farther out in the Gulf could still have an impact.
"It's possible that red tide out in the Gulf is still causing dead fish to wash up," she said.
"Or it could be a combination, so the red tide sickens the fish and then the diatom kills it.
We don't know."
Cissy Ramsey has seasonally lived at Beacon House condos for four years and has visited the area for decades.
She said she's never seen anything like this.
"On one hand you don't want people to think badly of your area, but on the other hand you have to make people aware of how bad it is," she said.
"It's tragic."
The smell of the rotting fish is so strong it permeates through closed car windows, and some residents don gas masks to throw their trash in the dumpster, which is near the water.
Ramsey said her neighbour ventured out to take pictures of the fish Monday but that after just a few minutes, the smell started making her sick.
"It's really bad, and it's getting worse because they're rotting and they're not going away," she said. "It's a terrible situation, and we've got to get it under control."
Collier County has deployed its contractor CrowderGulf, responsible for interior canal cleanups throughout the county, including Naples.
Molloy said she doesn't know whether the contractor has scheduled a cleanup for Moorings Bay. Meanwhile, the city is sampling Moorings Bay for low dissolved oxygen levels and the presence of Cylindrotheca, according to the news release.
The city will send the samples to the county and to the state's Fish and Wildlife Research Institute for testing.
Molloy said algal blooms similar to Cylindrotheca have happened in the past; last year a type of blue-green algae called Trichodesmium turned the water brown, and another type of algae also turned the water murky in 2012.
As for the current bloom, Hurricane Michael - which is predicted to make landfall along the northeastern Florida coast Wednesday - may help dissipate it, Malloy said.
"The storm may break it up a little bit, and the colder weather may also help it die off," Malloy said.